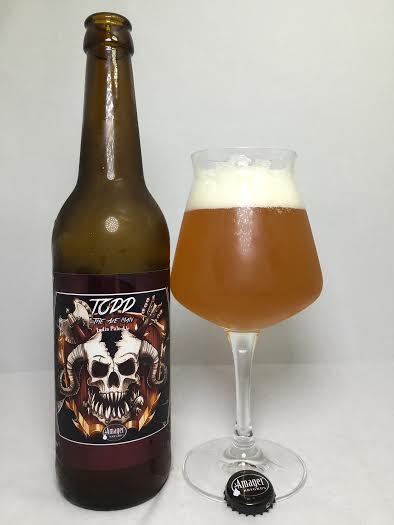 Surly Brewing out of Minnesota is recognized by the craft beer community as one of the premiere destinations of the midwest for great beer. They teamed up with Amager Brewing out of Denmark to collaborate on an IPA named in honor of Surly's head brewer Todd Haug who is a guitarist for speed metal band Powermad. It is an American IPA brewed with Citra and Mosaic hops. Both Surly and Amager released the beer on their own. Surly did it in cans and Amager in bottles. I have not had the Surly release, but who knows how different each interpretation will be.

It smells like a mandarin orange fruit cup with some wet grass.

This is a malt-forward IPA as that's all I get at the front of the tongue. As it transitions to the middle of the mouth a nice pop of acidic grapefruit and that aforementioned mandarin orange make their mark. Interestingly the bitterness of some dank hops quickly wash away any citrus flavors very quickly, but they are nice and grassy and not too dank. The finish has a touch of lemon, but with grassy hops.

Mouthfeel is what you'd expect from a 6.50% IPA. Maybe it can be a little doughy at times, but it's not preventing the beer from going down easy.

Amager's release of Todd the Axe Man did the American IPA justice with it's fruity aroma and taste. Does it stand out from such a large crowd? Not really, but this is still a delicious, refreshing, and easy-drinking IPA that I wouldn't mind having any day.