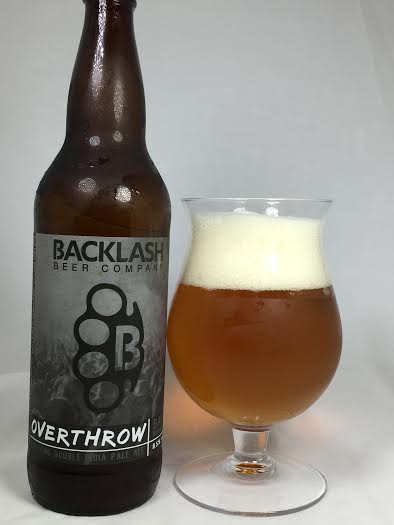 Massachusetts is trying to overtake Vermont as the New England destination for amazing beer. Sometimes other noteworthy breweries get lost in the noise such as Holyoke's Backlash Beer Company. Our beverage today is a Double IPA brewed with Citra, Galaxy, and Simcoe hops. Yum!

Aroma contains dank hops with tree bark and sap. Not very juicy at all, but has hints of grapefruit.

It's incredibly bitter in ever phase. Wet, mossy, earthy hops dominate with unrelenting dankness. A lot of great East Coast IPA's have a pine flavor to them, this is more fresh tree sap or wet tree bark and spruce. Not a Christmas tree, but more of a pine tree air freshener. For a beer that used Citra and Galaxy, I expected more citrus and tropical notes, but they are nowhere to be found. The bitterness of Simcoe is singing loud and proud in this one. A big malt component finishes things off, but it doesn't provide a sweetness to counteract the cloying bitterness.

Mouthfeel is medium, but bordering on syrupy, which is surprising for 8.50%. Based on the feel alone, you'd think we are hitting double-digit "Triple IPA" territory, but this is just a standard Double. The wet, bitter flavors tend to stick around as do the malts. It drinks like a big beer and leaves the mouth dry, but there is no alcohol presence at all.

Given the hops used, I wanted a juice bomb, but got a completely different beast. Those who desire an onslaught of bitter, dank hops will love this beer.  As for me, I thought the wet tree forest taste and never-say-die attitude of the Simcoe didn't create an experience that I'd go back to. I prefer my IPA's with a bit more juiciness, but Overthrow was not ready to provide that.