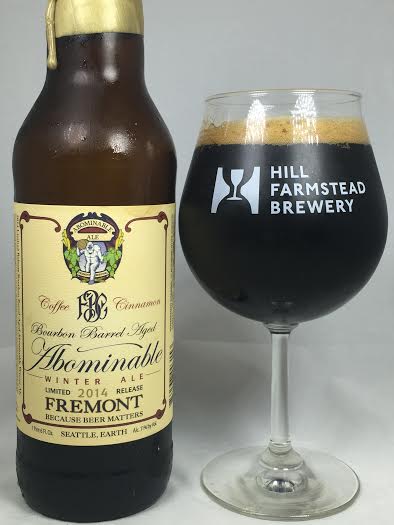 Fremont's Abombinable Ale is a classic winter warmer which was thrown into bourbon barrels in 2014. Some slight variations were also produced, and today's example of that is a BA edition with Cinnamon and Coffee.

Well, somebody drop the balloons because this is officially the darkest American Strong Ale or Winter Warmer that I have ever seen. It is pitch black like a stout with two fingers of a tan/light brown head.

The aroma owes a lot more to the English Barleywine than anything else. Massive dark fruits, fruitcake, caramel, and toffee burst out of the glass. After that it's sweet, sticky bourbon, cherry, wood, vanilla, and a dash of cinnamon. A slight alcohol sting is there too.

Again, very English Barleywine-like with its abundance of toffee, caramel, and dark fruits. If this was classified as part of that style, then this would immediately be among the best of its kind. Ridiculous amounts of black cherries are popping off as the beer warms along with cinnamon and spices (almost rum-like) that weren't as bold on the aroma. Definitely some big vanilla, slight cocoa, charred oak, and sweet bourbon. While slightly roasty, there's no real pop of coffee.

Mouth feel is thick and full. While sweet thanks to the bourbon, this is not cloying. The 11.00% creates warming in the chest, but there is no alcohol taste at all.

This Fremont offering was like an English Barleywine with spices thrown in. A lot of Winter Warmers I've had were heavy on the spices and cinnamon, but this beer not only had those characteristics, but also had intense dark fruits, caramel, and toffee to add layers of complexity. Throwing this into a bourbon barrel just added to the multitude of flavors and (unfortunately) may have even mellowed out some of the intensity. My biggest gripe is that I picked up little-to-no coffee. Other than that the beer is as good as advertised.