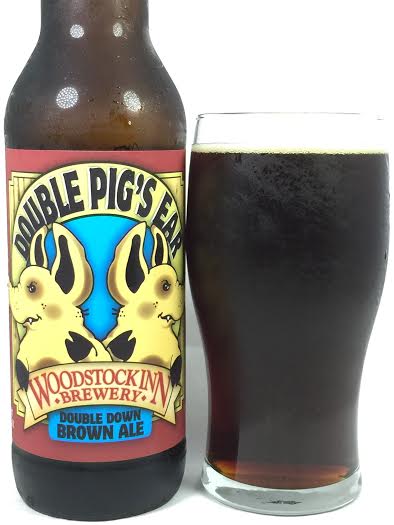 A cranked-up version of their standard Pig's Ear Brown Ale, Double Pig's Ear is my first foray into Woodstock Inn Brewing. It is brewed with Cascade, Mt. Hood, and Willamette hops and was, frankly, just something I grabbed off the shelf on a whim.

Pours dark brown with shades of ruby red and burgundy. I poured aggressively and got less than a finger of khaki head which disappeared quickly and left no lacing.

There's almost a weird, sticky molasses or sap character on the aroma. It's not unwelcome, just unexpected. Following that are sweet malts and a slight roastiness.

This is a lot sweeter than I had anticipated. Sweet, sugary maple and molasses hit me first followed by a bitter coffee roastiness and roasted malts. A slight nuttiness and something similar to dark roast coffee grounds are also present. I'm caught off guard by such a large molasses and sap component, and at times, it's coming off as slightly stale and even metallic, but it also has the taste of fresh oats.

Is this brewed with oats or oatmeal? I got that on the taste, but that would also account for a relatively creamy mouthfeel. At 8.40%, this does have that molasses-esque thickness, but no trace of alcohol or any booziness. The lingering spruce and mild metallic taste tend to linger, but the intense roasted character does help to combat any unpleasant characteristics.

Double Pig's Ear shares some attributes of upper echelon Brown Ales, but some of the flavors presented don't mesh too well. The sap and pine make things a little too sticky when added to the nuttiness and roasted malts. Each of these flavors work well in other brews, but here, they feel like a head-on collision of disjointed flavors. While some individual characteristics are enjoyable, I just don't think the total package came together that well.