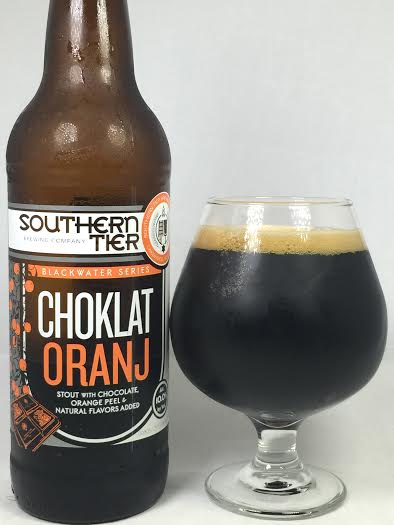 Southern Tier's "Blackwater Series" has produced some huge beers from massively-hopped IPA's to big, dessert-like Imperial Stouts. Their "Choklat" imperial stout is regarded as one of the best chocolate stouts in the world. Southern Tier has experimented with Choklat by adding coffee and vanilla beans. Now, they have added orange peel to Choklat to make Choklat Oranj.

Pours absolutely jet black, no ruby red or brown on the edges. Got half a finger of a beige, dark tan head.

I didn't expect the orange to be so powerful on the aroma, but it bursts out of the glass quite nicely. The base chocolate stout is also just as strong. It reminds me of a chocolate cookie sprinkled with orange-flavored crystal sugar.

The taste has a ton of rich, bitter dark chocolate with noticeable roasted coffee. Without question, as this warms, the orange just keeps getting stronger. If you've ever had the Terry's Chocolate Orange or any other orange-flavored chocolate candy then this is basically the liquid version of that. On the finish is just the slightest hop bitterness which is a welcome surprise.

Mouthfeel is so soft. As soon as you sip from the glass it's like your tongue is touching a cloud. The dark chocolate bitterness lingers and there is a slight alcohol taste, but it's not intimidating. Some mild warmth on this 10.00% beast, but again, it's easily tolerable.

Choklat Oranj retains the bitter dark chocolate of the base beer and the addition of orange did not hurt it at all. This is basically liquid candy with a double-digit abv, but hey, it works. I'd say even casual drinkers could take down the standard Choklat no problem, but as good as this is, I think the orange flavor is an acquired taste for sure. Those who do fancy that type of sweet will not be disappointed.