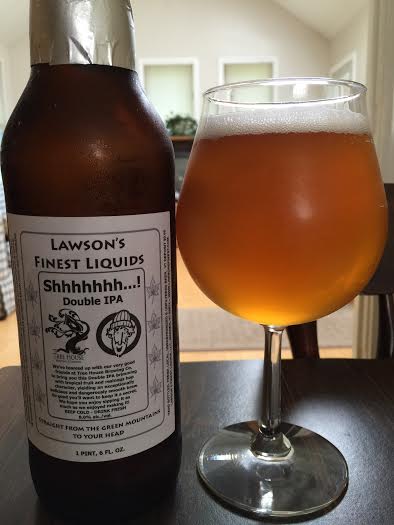 Around this time a year ago, Tree House Brewing teamed up with Lawson's and brewed a beer for Great American Beer Fest called "YAHHHRRRGGG!" which was a Double IPA. Weeks later, Tree House held a release at their brewery which I attended. It was without question the largest gathering of people for a beer release that I had ever seen. They opened at 11:00am and me and a buddy of mine ended up waiting seven hours to get our growlers.

This time around, the gang from Tree House made the trip to Vermont and did another collaboration with Lawson's which is what I have today. It's another Double IPA, but I could not find the hops used anywhere. The name Shhhhhhh...! is a play on the battle cry of YAHHHRRRGGG!. Will the beer be subdued like its namesake?

Pours a slightly hazy glowing orange with less than two fingers of white head. It doesn't have that classic unfiltered look like many great New England IPA's.

The aroma has a big resinous character, but it doesn't dominate. Some nice spruce/pine and a little bit of peach with hints of garlic and onion.

Yeah, the taste matches the nose fairly well. It's an even combination of pine needles and hop resins and oil. The label says it's brimming with tropical fruits, but for me, I get earthy, herbal hops as opposed to anything juicy, but it still tastes good. There isn't peach on the taste like the little I got on the nose, but the biggest fruit component I pick up is similar to red apples, or apple juice which is very juicebox-like. The finish has a resurgence of hops with bitter grassy notes lingering beautifully.

With a beer big on hop resin, this isn't thick or syrupy. Mouthfeel is spot on for 8.20% as it isn't thick or chewy and it doesn't get thin at any point in time. It is noticeably dry on the finish, but an Imperial IPA with a big resinous character is bound to produce such a feeling. No alcohol smell or taste and this bomber can be knocked out in no time.

Shhhhhhh...! doesn't exactly follow the trail blazed by so many New England IPA's, but the end result is a satisfying experience. Big herbal hops and piney resin could have been a combination for a thick, chewy, undrinkable IPA, but this has the drinkability of lighter IPA's while giving you maximum flavor.