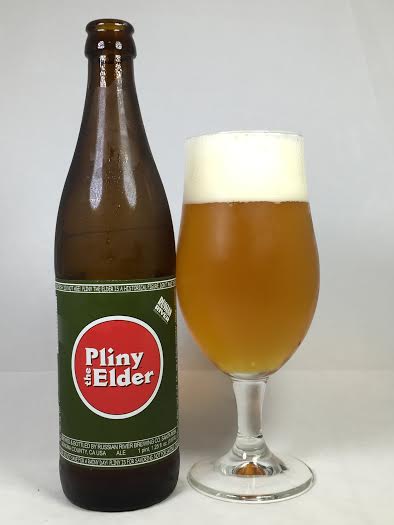 I'm in the presence of a legend. Pliny the Elder is one of those notorious, hall of fame, bucket list beers for many in the beer community. A double IPA regarded as one of the best in the world, it is still considered THE best beer from the West Coast in a lot of people's minds and it currently holds a Top 20 rating on both Beer Advocate and RateBeer. I have to give a huge thanks to Seth for hooking me up with a couple of bottles.

The nose is bursting with pineapple and a little bit of grapefruit, and maybe even a hint of kiwi. After that are flower hops and a sweetness that reminds me of the Lagunitas Sucks. I can detect even a small amount of spruce or pine as well.

Deliciously bitter hops hit the front of the tongue as a nice welcome. I will say the fruit from the nose has mellowed out on the taste, but remnants of orange and other citrus are still present throughout. A slight touch of West Coast garlic and onion, but they are by no means the main attraction and they actually work here to accent the other flavors. That candy-like sweetness is back too which is similar to sucking on Skittles. Bitterness returns on the finish with a fresh hop flavor that adds a nice kick to the end of the journey.

At 8.00%, this is not a hard IPA to drink and isn't dry for the most part. It has enough tropical notes to make this drinker-friendly while the hop heads will go nuts for the bitterness. The sweet and fruity flavors go pound-for-pound with the the hops which makes this appealing to everyone.

Pliny the Elder is certainly a superb example of the West Coast IPA. I tend to think of the West Coast as incorporating absurd amount of dankness and garlic/onion into their IPA's, but Pliny has used that as merely a guideline and has injected juicy tropical fruits and candy-like sweetness into the West Coast style. I'd say it is worthy of its reputation.