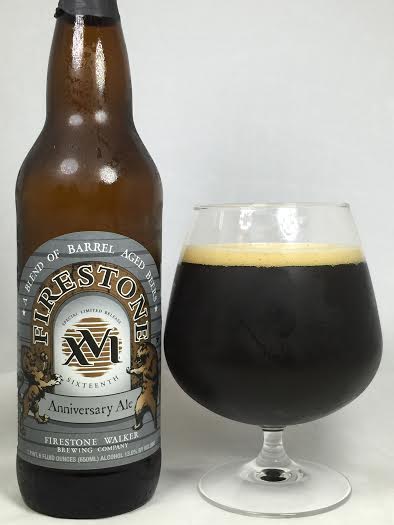 The Final Blend (% of final blend)

Poured dark brown out of the bottle, but was pitch black in the glass with hints of that brown on the edges when held up to the light. An aggressive pour still only yielded a half a finger of khaki-colored head.

Quad characteristics hit me first on the aroma: plums, cherries, raisins, and some brown sugar too. Oak from the barrels is also prominent as is sweet bourbon. Rounding things out are subtle milk chocolate, roasted malts, and just a splash of tequila.

Like the aroma, the Quad elements shine the brightest. Figs, dates, and raisins remind me of a well-made Belgian Quadrupel. The bourbon is slightly mellowed out and not as sweet or up front as the aroma would lead you to believe, but it still here. A sticky molasses component bordering on maple is also fighting for attention as is milk chocolate, caramel, toffee, and a hint of vanilla. I must say that I can easily pick out all of these flavors, but I can't help but feel that they don't "pop" as much as they would have if this was fresh and not aged.

Like a lot of great stouts, this has a thick, viscous mouthfeel that coats everything in sight. For such a massive, complex beer at 13.00% abv, the alcohol is non-existent. I don't even get warming in my chest and that in itself is an accomplishment. Some residual stickiness is left in the beer's wake, but lingering dark fruits and sweet bourbon are just delicious.

Firestone 16 has a multitude of flavors that can make your head spin. The stout components are not as strong as the dark fruits of the Stickee Monkee or even the caramel and toffee of the Double DBA. I'm not putting it down for those reasons, but I'm just saying that a beer that is 41.90% imperial stout/oatmeal stout/buckwheat stout needs to have more a stout kick. Nevertheless, this continues the tradition of these massive Firestone anniversary beers with tons of barrel character and enough flavors to last you a lifetime...that is until the next anniversary beer.