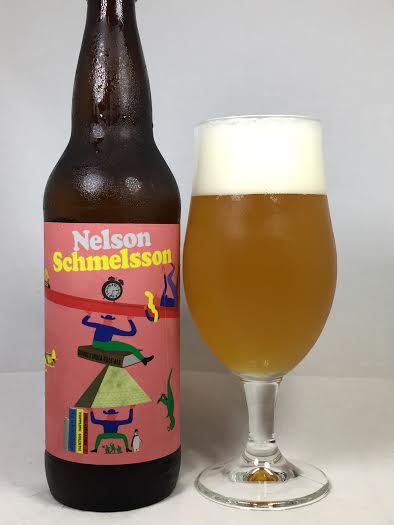 Toppling Goliath's pale ales and IPA's are some of the most sought after in the country. Now, when you then bring in Mikkeller (one of the most notable names in the beer world) for a collaboration, you can't help but expect good things. There's not a lot of info available online about this beer, but I'll assume by the name that it is an all-Nelson IPA (pretty safe assumption). When I think Mikkeller, I think of their stouts and their "Beer Geek" series, but hey, if you collaborate with Toppling Goliath, then a crowd-pleasing IPA is almost a guarantee.

Pours a hazy, dark orange. Some nice carbonation coming from the bottom of the glass and it produced three fingers of a white, frothy head.

Big grapefruit with subdued white wine and subtle grassy notes on the aroma. Maybe even a slight lemon peel too.

The taste smacks you with Nelson hops as white grape and white wine are at the front of the line. The front of my tongue hits all the juicy notes of this beer with additions of pineapple and even a bit of lime. A decent-sized malt component near the back along with good bitterness and some wet grass.

Mouthfeel is medium with a slightly thick/syrupy body. None of the juices linger as the malts and bitterness are what sticks around the most. No alcohol taste at all.

Nelson Schmelsson delivers on the Nelson hops with white grape and other tropical fruits. I wish the finish and aftertaste were full of more of those grapefruit and wine notes. Overall, this made good (but not great) use of Nelson as I found the malts and bitterness overpowered the fruits and juices.