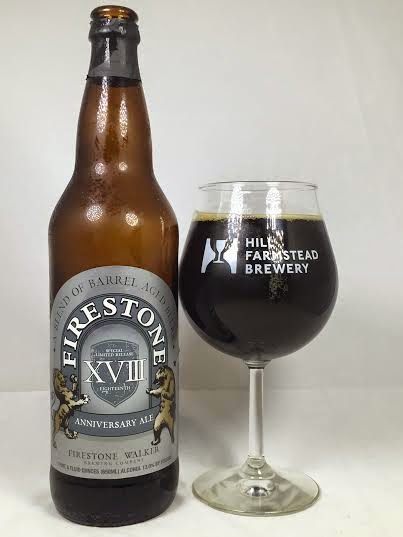 If you haven't heard of the Firestone Walker Anniversary series then strap yourselves in. Every year, FW gets a bunch of winemakers together and they form teams. Each team creates a blend of several FW beers and blends them in different spirit barrels like bourbon, brandy, tequila and stainless steel Firestone Union barrels. The best blended beer is awarded as not just the winner, but their creation is that year's anniversary release. The 18th anniversary beer was blended together from 9 different beers in 227 oak barrels. Yeah, holy shit is right.

The Final Blend
Had enough yet? I like that Parabola was the biggest component this year, so hopefully that's an excellent sign of things to come.

The pours is pitch black and easily the darkest of the Firestone anniversary beers that I've ever seen. Usually they tend to be very dark brown when held up to the light, but this was black as night. I got maybe half an inch of slightly off-white head.

I can't remember the last time I visibly smiled after just smelling a beer. Incredibly sweet bourbon and brandy on the nose followed by huge oak, dark fruits, roasted malts, hint of chocolate, and just a touch of alcohol.

I gotta tell ya, I pick up some serious doppelbock and quad characteristics in this one despite the huge Parabola component. Definitely huge raisin, fruitcake, and bourbon are what stands out. Some milk chocolate and oak and even a hop bite on the finish thanks to the Wookey Jack and Double Jack. It has an uncanny fruity character thanks to the IPA's involved in the blend and the hops lends a great bitter character to the imperial characteristics of this complex and bitter brew.

With so much complexity, it is so incredibly drinkable. The array of flavors lead to a satisfying palate with it's range from dark fruits to tropical juices, to sugary sweetness to roastiness to complex spirits. A true mind f**k if I've ever seen one.

Firestone 18 has too much going on for it (in a great way). Considering all of the blended FW beers in this, I am not surprised that all of the characteristics of so many of their beers are present in this collaboration. Everything from the chocolate and bourbon of Parabola to the malts and bourbon of Stickee Monkee to the hops of Wookey Jack and Double Jack come to the table and deliver in ways I couldn't have imagined. I wouldn't dare call this complex because that would be an understatement. Superb in so many ways, and just a joy to drink.