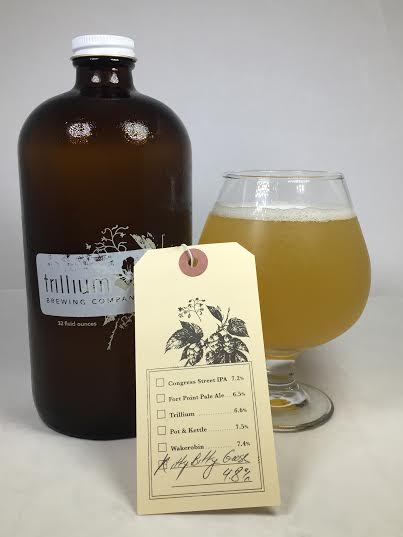 Always nice to try a draft-only offering from Trillium. This pale ale is brewed with pilsner malt and dry-hopped with Simcoe and Columbus hops.

Pours hazy yellow with a finger of bright white head.

The pilsner malt is subtle with a slight biscuit or cracker beadiness, but the hops create a big lemon zest aroma that is quite juicy.

The taste is more pale ale than pilsner, which is obviously what the style was aiming to do (yeah, no shit). What I mean is, I was bracing for a bigger malt presence, but it wasn't the main contributor. Despite its 4.80% abv, the front of my tongue detects a nice pop of bitterness. Soon after that lemon from the aroma comes into play near the middle. A nice, crisp lager component adds nicely to the other flavors. Everything does tend to thin out on the finish, but nothing lingers unpleasantly.

Given the style and abv, I can give some leeway to a slightly thin body, but I'm not exactly letting it off the hook. As I mentioned, this starts out nice, but nothing sticks to your palate, so you don't get to enjoy much for an extended period of time. Even so, this does have a refreshing and crisp feel which is easy to slug down.

Itty Bitty Goose had a nice flavor profile with decent hop bitterness, bready malts, and lemon zest, but nothing stuck around long enough to let you kick back and enjoy them. While they were around, they were refreshing and non-cloying. The best way to sum it up is that the flavors left as quickly as they arrived, but this is still worth your time for the moments that did leave a lasting impression. A light and flavorful pale ale is what this is, and hey, there's nothing wrong with that at all.