Other Half Citra IPA 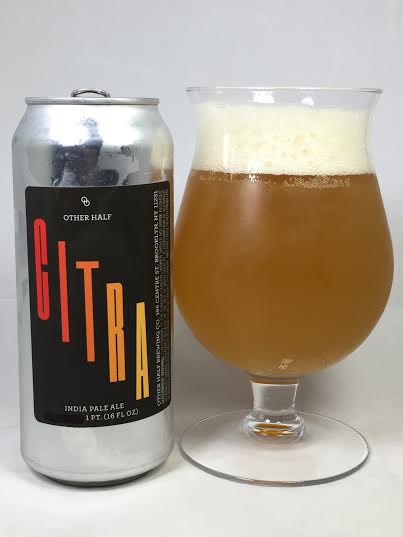 Other Half has a line of what appear to be single-hop beers and they are all named for the hop they use. I've seen Citra, Nelson, Mosaic, and Equinox varieties, but today's subject is Citra IPA. Beer Advocate lists the ABV as 6.80%, but in the pic above, the abv is blacked out next to "1 PT". I actually had to scrape it off where it said 4.20%. The website is no help as it doesn't list any vital stats. 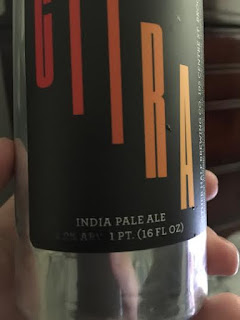 I get fresh orange juice on the aroma and some sweet bready malts.

The taste is enjoyable. The orange juice from the aroma is pulled back a little, but it's still there and quite refreshing. As the beer travels along the tongue, the juice starts to fade in the middle, but on the back end the emergence of some grassy hops come forward, but they too fade away quickly as no flavor sticks around too long. The malts are actually pretty big on the taste with a larger-than-expected biscuit or cracker flavor on the palate.

Referring back to the "ABV Scandal", I'd actually say this leans more towards the 4.20%. It drinks lighter than 6.80% and this would account for the somewhat watered down flavors. I will say that I am chugging away on my pint can as drinkability is sky-high with this one. No alcohol taste and even though the flavors thin out as it passes along the tongue, what is there is refreshing while it lasts and doesn't leave anything unpleasant behind.

Citra IPA delivered slightly on the Citra, but the malts did more talking than the hops. It's too bad the flavors were watered down as this could have been a solid IPA worth drinking by the case. As it is, it's actually pretty sessionable and won't kill your palate. I'd say it's ideal for the Summer months as you could probably kill a 4-pack in no time, but I still wish the Citra hops played a more prominent role.

Email ThisBlogThis!Share to TwitterShare to FacebookShare to Pinterest
Labels: American IPA, Other Half, Review