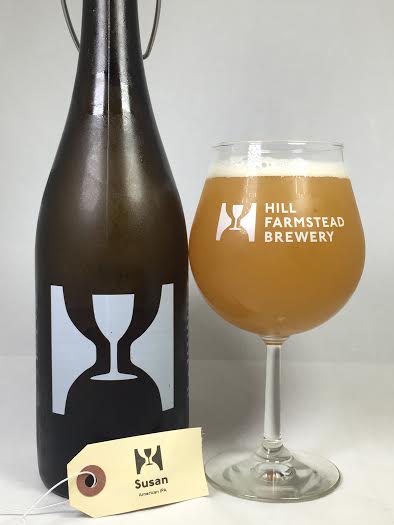 Part of Hill Farmstead's Ancestral Series, Susan is an American IPA brewed with Citra, Simcoe, and Riwaka hops. I recently worked out a trade that just kept snowballing with expansion and my tradee mentioned he was making a trip to Vemront, so I threw an offer out there and he accepted. So a big thanks goes out to Tyler for hooking me up with this one!

Susan pours like fully loaded orange juice containing the pulp of an entire grove of trees. It's unfiltered and gorgeous with a finger of white head.

Some big citrus on the nose, but with incredibly dank, mossy hops and maybe a little bit of onion too.

There' more peach than orange on the taste, but is still just as forward as the orange was on the nose. The Simcoe is really contributing the dank flavors, but it's doing so without taking attention away from the citrus. It's a lot more bitter than the nose would leave you to believe, but the hop taste is incredibly fresh. As I get with a lot of New England IPA's, there is some dessert-like creaminess reminiscent of orange sherbert.

Mouthfeel is creamy and full-bodied for the style. Never at any point, even on the finish, do the flavors thin out or does it become watery. With a big dank and onion component, some IPA's tend to let those  flavors linger unpleasantly, but Susan doesn't let that happen, and in fact, it's the orange and peach that stick your palate the most. It's also incredibly soft and not dry at all with no alcohol presence.

Susan follows the same path as a lot of IPA's in the area, but that's not a criticism, it's a compliment. Equally combining elements of citrus, bitter hops, and dankness, Susan has serious complexity to dazzle veterans, but is non-intimidating enough to satisfy rookies.