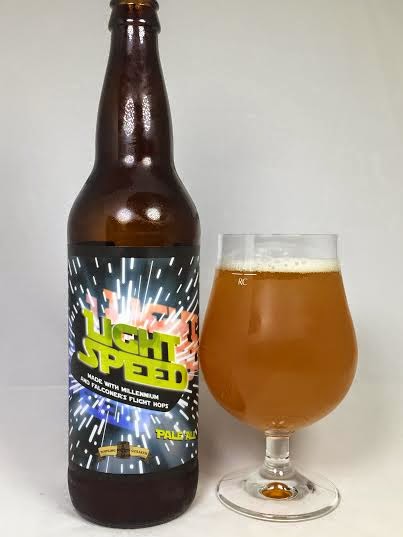 Brewed with Millennium and Falconer's Flight hops, Light Speed is a hopped-up pale ale formerly known as "Millennium Falcon". For obvious copyright issues (having to do with Star Trek or something), the name was changed, but the beer stayed the same.

Appearance is a hazy orange, can't see a thing through it. Not much head, maybe half a finger of an off-white color.

Very acidic grapefruit and orange juice on the nose with some lemon.

The lemon was subtle and in the background on the aroma, but it's the first of the fruits that come through on the taste. Not only acidic, but tart as well. Gladly, the bitterness, which was absent on the aroma, has finally showed up and it is at the front of the tongue right before any juiciness kicks in. Bitterness is quite potent on the taste despite being a 5.80% pale ale, so that's always nice. In the middle, lemon gives way to the fresh orange flavor which carries over to the finish, but without leaving any unwanted acidic aftertaste.

Considering the style and abv of 5.80%, this is perfectly medium-bodied and actually has a nice, creamy mouthfeel to it. Maybe slightly dry in the finish, but it's hardly worth mentioning (yet I just did...whatever).

Bitter, juicy, and drinkable, Light Speed is superb in its drinkability as I was tempted to slug the whole bomber down without even thinking twice. It's a great pale ale with the grapefruit, lemon, and orange, but it also comes close to being categorized as a standard IPA with it's body and hop bitterness. Great balance and fully flavored. Need I say more?