Other Half Green Diamonds 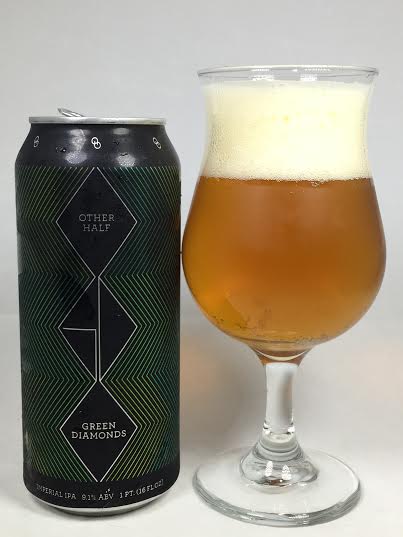 Other Half Brewing recently passed the one-year mark. They are a small operation out of Brooklyn, NY that has garnered a lot of buzz and is known for creating some tasty IPA's. Right now, we are looking at Green Diamonds, a big 9.10% Imperial IPA brewed with Australian Galaxy and Amarillo hops.

Aroma has some resinous pine and West Coast dankness. Maybe a slight peach smell, but it's subtle.

This is eerily similar to the Stone "Enjoy By" series, but if you're me, then that isn't exactly blowing wind up your dress. The #1 thing I pick up is thick, syrupy resin, which makes sense for a 9.10% IPA. It has a lot of similarities to big West Coast IPA's with it's presence of garlic and onion and (at times) overly bitter, herbal hop character. As with the aroma, I do pick up the faint hint of peach in the middle of my mouth, but it is quickly whisked away by the dominant, bitter hop presence.

There's an art to hopping a beer to high heaven and then there's just throwing as much in as you can while keeping the beer drinkable. I would say this belongs in the latter. My palate is becoming quite fatigued as I finish the can and that thick, syrupy feeling lingers quite a bit. I did pick up some slight warmth on a few sips, but it wasn't a constant feeling throughout. Even though it drinks like a 9.10% IPA, there is actually no alcohol taste or smell to report. As expected, it's pretty damn dry, so just know that going in.

Green Diamonds delivers as a massive Double IPA, but it's not the most drinkable Imperial you'll come across. I would have never guessed this was a product of the East Coast as I would have pegged this for a California recipe in a blind taste test. This beer owes more to the West Coast with it's clean, filtered appearance, dank hops, and garlic/onion taste. Those who love big Stone Brewing IPA's will latch onto this offering from Other Half, but it's not my cup of tea.

Email ThisBlogThis!Share to TwitterShare to FacebookShare to Pinterest
Labels: Imperial IPA, Other Half, Review