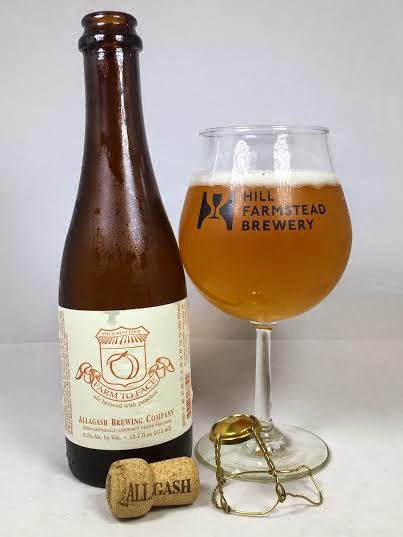 It's getting warmer out, so let's have something tart and refreshing. Allagash Farm to Face was originally a pale ale, but was fermented in stainless steel with house yeast, bacteria, and three pounds of peaches per gallon. After that, it was aged for 10 months to give us what we have today. I have previously reviewed Allagash Nancy which was similar, but made with cherries.

Pours a mostly clear, slightly hazy pale orange/dark yellow with a good amount of carbonation. It produced less than a finger of a fizzy, white head.

The first thing that hits is the bacteria strain and pleasant tartness followed by sweet peach and even some green apple.

The peach is not as overpowering as I thought it would be, but it's definitely here and is pretty sweet once you get past the tartness. That sour green apple is back and those bacteria strains are making this one go down like a lemon Warhead candy, but not as extreme. There's even some white grape and flower in there, but peach is subdued throughout.

If you want a sour ale, then you certainly get that here. I think mouth-puckering would be a great word to sum this one up. It's not so intense that you need a sip of water between swigs, but it's still strong enough to widen your eyes. The sourness stays all through the experience and the finish is noticeably dry. Lots of carbonation move this one along which prevents the tartness from overstaying its welcome.

In the end, Farm to Face is pleasantly tart sour ale good for a warm day, but I wish the peach was more prominent so that the fruit could help even out the sour qualities.