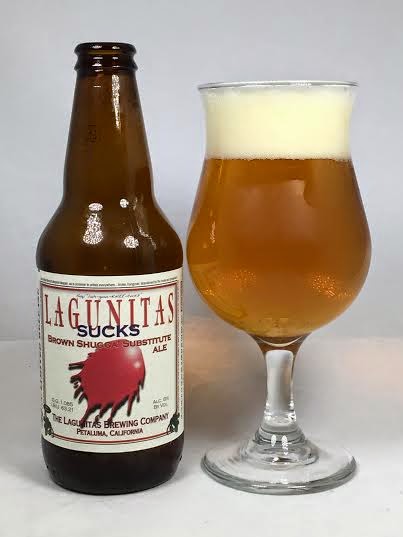 The story behind Laguinats Sucks is just as interesting as the beer itself. Basically, many years ago, Lagunitas didn't have the brewing capacity to brew one of their other beers called "Brown Shugga'". It was something they did not plan for and they had to cancel Brown Shugga' for that season. Instead, they whipped together an Imperial IPA and sort of tongue-and-cheeked the entire fiasco by calling the beer "Laguintas Sucks" after the complaints from many of their consumers over the (temporary) loss of Brown Shugga. It was meant to be a one time deal, but this replacement beer turned out to be such a hit that it was brought back as a yearly release, and now more recently, it has become a year-round offering.

Pours a transparent, glowing orange with good carbonation off the bottom of the glass. Produced two fingers of pure, white head.

The aroma is an intoxicating mix of mangos and tangerines with some flower hops and west coast biting bitterness.

It's interesting, the taste comes up a lot sweeter than what I was expecting, but we'll get to that later. There's some slight bitterness on the front of the tongue, but the fruit and juice quickly whisk that away. Most of those tropical fruits are here on the taste, It's like pineapple juice, but more bitter. Referring to the sweetness, I'd dare to say the orange flavor and sweet flavor sort of remind me of skittles or starburst.  The hops actually make an encore at the end and really make an impression on the back of my tongue.

At 7.85%, this is called an Imperial, but it really dances on the edge. Like most Imperials, this does have a noticeably dry mouthfeel, but I"m not dying of thirst anytime soon. As an Imperial, hop bitterness was here throughout, but the fruits and juices stole the show for me. It was juicy enough to be refreshing as all hell, but bitter enough to let you know that this was a serious IPA even though it was insanely drinkable and delicious.

Lagunitas Sucks? Absolutely not! It's full-bodied, bitter, fruity, refreshing, and drinkable. What else do you want? I always love it when IPA's are more than just a glass of hops and Lagunitas Sucks is probably one of my all-time favorites of the style.