Other Half Nelson IPA 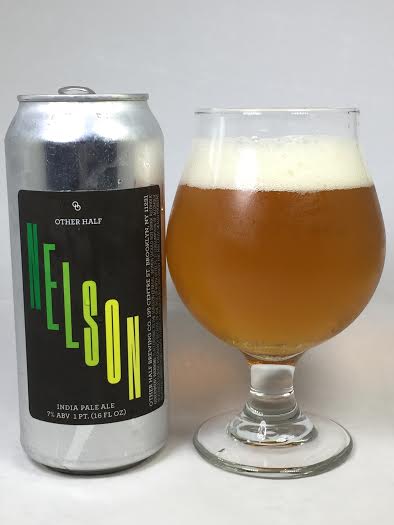 Next in the line of single IPA's from Other Half is Nelson IPA. As mentioned previously with Citra IPA, this is a series of IPA's with the same recipe, malt build, etc, but they just change out the hops used.

Pours a mostly hazy light orange with a finger of white head.

The aroma is very herbal and spicy with just a hint of grapefruit hidden deep in the back.

With a beer named "Nelson", I'd expect some more white grape and tropical fruits, but it unfortunately lacks those flavors. Instead this has intense grassy and herbal hops with a little bit of pine for good measure. It's also quite resinous with a significant spice presence that I could have confused for Summit hops. Not surprisingly like Citra IPA, the malts are just as present as the hops, which isn't what I wanted out of this IPA.

The resin and grassy notes linger and it does have a distinct, I don't know, chewy or powdery feel to it. It's also quite dry, thin, and none-to-refreshing. No alcohol presence, and if it wasn't for a rough mouthfeel, this would have obviously been easier to swallow.

I feel like Nelson IPA could have triumphed over its shortcomings if it actually had the typical flavors you associate with Nelson hops. As it is, this is a mostly thin and chewy IPA with big spice, grass and a lasting resin aftertaste.

Email ThisBlogThis!Share to TwitterShare to FacebookShare to Pinterest
Labels: American IPA, Other Half, Review