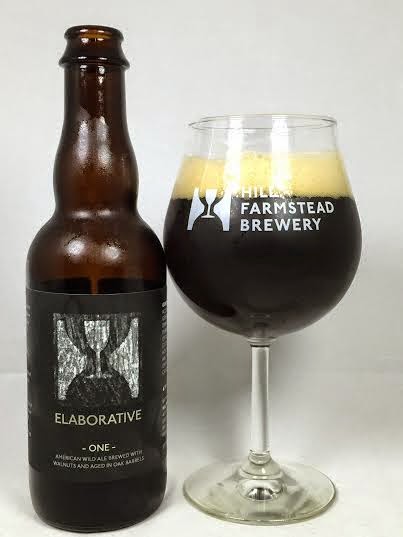 I think it was June 2013 when I made a trip up to Vermont for a Beercation. I had been to Hill Farmstead before, but that day was my first bottle release. On that day, they released Madness & Civilization 1 & 2 as well as Civil Disobedience #6. That baby pictured above was also on sale at the retail shop. It's a brown ale brewed with Ohio walnuts and aged for 18 months in multiple oak barrels, each with a different yeast and bacteria strain. Then they are all blended together to produce the final product.

Appearance looks black in the picture, but is actually dark burgundy/dark brown similar to a Rodenbach Vintage. It produced two fingers of an off-white head which stuck around for the duration of drinking.

Initially the sourness of the ale hits me first on the nose, but when you take in another sniff, some big sweetness from the base brown ale comes through with nuttiness and charred oak.

Those sour qualities are here on the taste, but not as intense. They're not lacking in any way, but it's good that this isn't a mouth-puckering brew with nothing more to offer. I definitely think those walnuts have helped counteract the tartness and it works beautifully here. The sweeter flavors I pick up are some brown sugar and the barrel has lent some hints of vanilla here too with even a tinge of maple or sap. Sourness picks up again on the finish, but it's pleasant and not a turnoff.

A lot of sour ales are big sippers, but this one went down almost too easily. It has high drinkablity, but be warned as there is a fair share of carbonation from start to finish. It's medium-bodied and finishes clean.

As a sour ale, Elaborative One is one the better examples I've ever had. As a Brown Ale, it is unfair to compare it to any Brown Ale that came before it. Those walnuts not only added the nutty flavor to the mix, but they helped even out this beer and prevented the sour component from taking over. It's tart, sweet, and balanced beautifully.