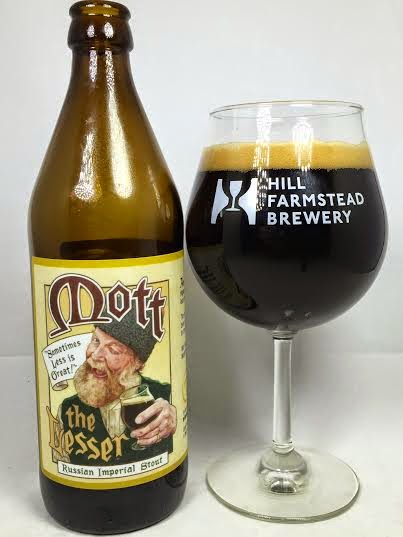 A little over two years ago, Brewmaster Tod Mott left Portsmouth Brewery to open what would become Tributary Brewing in Kittery, Maine. Mott and Portsmouth parted amicably, but in his departure, Mott took the recipe for the famed Kate The Great Imperial Stout, which was considered one of the best beers in the world. The beer world hoped Kate the Great would return, and finally last week, prayers were answered as Tributary held the release for the reincarnated Kate the Great in the form of Mott The Lesser. From what I have heard and read, MtL is the same recipe, but MtL was partially aged in Apple Brandy barrels and Port. As far as I know, Kate the Great wasn't aged at all, so it looks like what was regarded as an elite beer has become even better. There were only 1,400 bottles or so released, so I was lucky enough to snag one in a trade. Thanks, Mike!

Pours black as night with dark brown on the edges when I held it up to the light. Got a finger of a light brown/khaki head.

The aroma is super dark fudge brownie and wood with lots of roasted malts and even some cherry or plum.

A lot of roastiness on the first initial sip. I pick up a sticky molasses component too. There's a slight Port flavor and again a slight Apple Brandy, but they aren't huge contributing factors to this beer. If anything, the char and oak from the barrels lend more of a hand to the overall taste than anything else. That cherry plays in on the middle of the tongue and the finish brings back that fudge brownie and bitter dark chocolate. Maybe a little bit of alcohol, but nothing major.

Man, I can't recall a smoother RIS in recent memory. It's velvety, fluffy,and coats the whole mouth without being cloying. At 10.50% the alcohol is barely there and leaves a slight warming in the chest on each swallow.

Mott the Lesser had a lot of hype around it and as a standard RIS, it delivers with it's superb mouthfeel and mix of coffee roast, fudge, and hints of dark fruits. As a beer that did mention Apple Brandy and Port aging, I was hoping for more of a presence, but I can understand their absence as it was only partially aged. Then again, the charred oak from the barrels showed up to reassure the barrel character was legitimate and well done. If you have a bottle, crack it open and sip for hours to let the complexity come through.