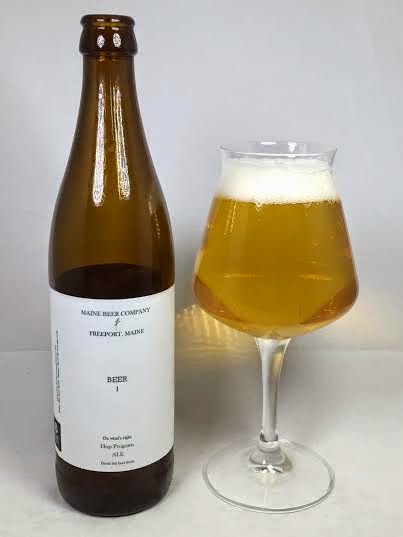 The first entry into Maine Beer's Hop Program features Mosaic, Columbus, Centennial, and most interestingly, Nelson Sauvin hops. The Hop Program is Maine Beer Co's way of experimenting with new hop combinations and moving forward in their recipes and progression as a brewery as a whole.

Pours considerably lighter than I expected with a glowing yellow body with lots of carbonation and a finger of bright white head.

The aroma contains big grapefruit with some cedar, spices, and even some lime.

I think the Mosaic hops are the biggest contributor on taste for me. I pick up some fresh-cut grass, black pepper and the aforementioned cedar. On the back there's a detection of white grape and white wine thanks to the Nelson. It has a big yeast component that was unexpected and the front of the tongue is picking up some cracker and breadiness, almost a bit doughy. Maybe even some lemon peel or zest to round everything out.

The body is incredibly light, but that's not to be confused with thin or watery. The finish is dry, but also clean and no alcohol is present at any time. It did lose a little zip on the back end, but that's easily forgiven.

Beer 1 was more similar to a Blonde Ale than a straight IPA, but it was still packed with hops and flavor without being watered down. The Mosaic hops were the star for me with Nelson being an accent on the back. I didn't expect the yeast and even a bigger-than-usual malt presence, but this was a winner and hopefully just a taste of what's to come from the Hop Program.