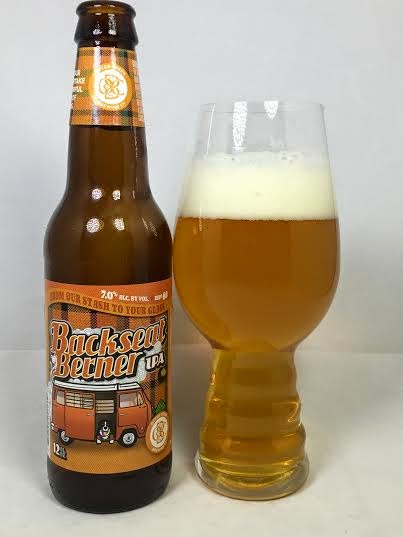 One of Otter Creek's latest releases is their first ever year-round IPA which is bursting with multiple, juicy American hop varieties like Citra, Cascade, and Simcoe. At 7.0%, it is flirting with Double IPA status, so hopefully it has serious hop bite, but mellow enough to showcase the juices and be drinkable.

The aroma has an orange juice, almost Sunny-D quality to it. It reminds me a lot of the Foundation Epiphany, and that's a great thing. It also has some grassy hops in there too.

Hop bitterness is pretty damn big on this one, especially for a non-imperial. There's an initial wave of citrus, but it is a tease as it is immediately washed away by the dank hop character. Now, I don't say that like it's an unfortunate thing. It's bitter up front, in the middle, and on the finish. Actually, the more I take it in, the end does come back to the juicy hops with somewhat of an orange juice pulp that lingers on the back of my tongue.

Considering how bitter the hops can bite, this does tend to be slightly dry, but also remarkably refreshing at the same time. It's a rare combination, but it has worked here for Otter Creek. Your palate isn't fighting the dry bitterness because the juicy hops help combat them, but the juice lets up just enough to let the bitterness linger in a beautiful way.

Backseat Berner could easily compete with tons of Imperial IPA's on the market, but those Imperials would not have the same smooth mouthfeel and drinkability, which makes Backseat Berner the better choice. It's a full-bodied 7.00% IPA with all the bitterness of a Double IPA, but at a more drinker-friendly cost to your palate.