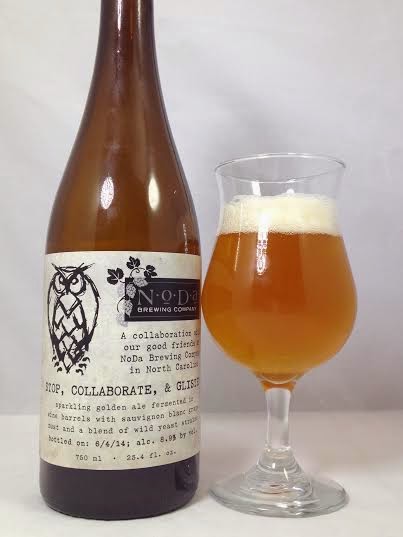 Fermented in wine barrels with Sauvignon Blanc grape must, this collaboration between Night Shift and NoDa Brewing is a big 8.90% Wild Ale. NoDa gained notoriety last year at the 2014 World Beer Cup when it unexpectedly took the gold medal in the American IPA category. Night Shift wisely hooked up with the hot name in the beer world at the time and brewed a beer that was in Night Shift's wheelhouse.

Pours a murky, glowing orange with decent carbonation and it gave off two fingers of fizzy white head that disappeared quickly.

The aroma is fresh, tart white grapes, white wine, and some sweetness.

Wow, is that tart. Tart from both the white wine as well as the bacteria and yeast strains used. There's very subtle oak, but the sweetness from the aroma is back on the taste. I can't quite put my finger on it, but it has almost a cream soda quality and that kind of flavor helps offset the tartness. In addition there's a slight fresh-squeezed orange juice taste on the back with some pineapple too.

When held in the mouth, this has tons of carbonation much like soda and the tartness is mouth-puckering. However, given it's assorted palette of flavors, the combination of sour and sweet makes this highly drinkable and quite refreshing. It has a medium body and I would have never guessed this was almost 9.00%.

This collaboration brew between Night Shift and NoDa has a well-constructed equilibrium of sour and sweet. This was originally released in the summer of 2014 and it I can see how it would be ideal for a hot Summer's day with it's sourness, light-to-miedium body and refreshing finish. If there's a better beer named in honor of a Vanilla Ice song, then I have yet to find it.