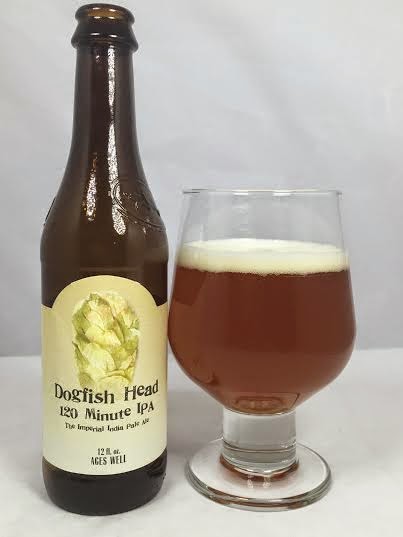 Intimidated? Yeah, maybe a little. The legendary Dogfish Head 120 has found its way into my hands and what a treat it is. As some of you may know, this is a giant Imperial IPA that is continuously hopped in the boil for two hours (120 minutes...get it?) straight and then dry-hopped for an additional month and then aged for one more month on whole leaf hops. Have you had enough yet?

Pours a dark, dirty, rusty orange, bordering on brown, with a finger of bright white head.

This has an interesting aroma of dried flowers, caramel apples, and a sting of alcohol.

When it comes to taste, the flavors and strength might lead you to believe this is a Barleywine rather than an Imperial IPA. Some raisins and other dark fruits make their debut, but obviously with intense hop bitterness. I mentioned caramel on the aroma and my tongue picks up some butterscotch and toffee in addition to some cherry. It's a much sweeter IPA than what I'm used to and that caramel apple tends to be a little cloying. The 18.00% does play into the taste as I do get some heat on the finish, but surprisingly it isn't a huge factor.

At 18.00%+ and the amount of hopping that goes into the recipe, I was surprised at how drinkable this actually was. Yes, some burn is on the taste, but going in I was preparing myself for something along the lines of straight scotch and what I got was an intense Imperial IPA. It's not as syrupy as I thought it would be and the carbonation moves all of the alcohol along. No doubt a sipper, but taking in more than a little at a time is easy to do, but probably not recommended.

Dogfish Head 120 Minute IPA's reputation precedes itself. Make no mistake, this is an intensely bitter IPA with Barelywine characteristics. Despite that, this is remarkably drinkable considering the process that went into making it. Grab your 12oz bottle and sip away for hours because that's all you're going to be able to (happily) take at once.