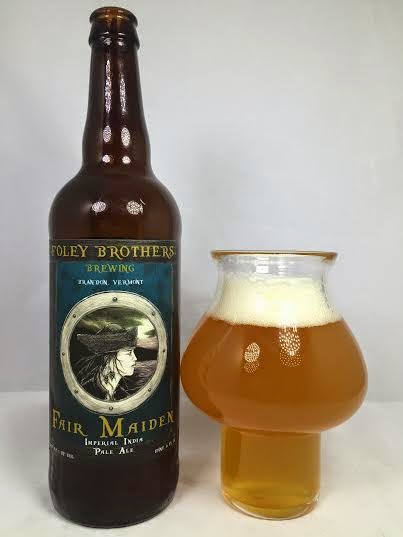 Not a lot of information is available about Foley Brothers. What we do know that it is a very small operation which is apart of the Neshobe River Brewing Company in Brandon, VT. Neshobe River is primarily a winery, but their beers by Foley Brothers are making huge waves in Vermont and the rest of New England.

The aroma is quite varied. I'm picking up some spicy hops (possibly Summit) with black pepper, cedar, and some garlic/onion.

Pretty much everything on the aroma is here on the taste. The description on the bottle says this is made with seven different hops and I wonder if Mosaic is in here as the black pepper/cedar is here in a delightful way. What is different is the presence of some grassy hops and even the faintest hint of pineapple or even white grapes. Not a lot of that West Coast garlic on the flavor, but it still has moments of dankness. When they say it is made with seven hop varieties, I believe it because this seems to hit all of the characteristics of juicy, dank, spicy, and earthy hops.

It's not often I call an IPA "fluffy, but there's a first for everything. It has a soft mouthfeel that is welcoming and as an 8.20% Imperial, there is no alcohol presence. A nice kick of carbonation moves the intense hop flavor along and the flavors stay through from front to back with nothing lost along the way.

Fair Maiden has a lot of diverse hop flavor which makes it more complex than your usual IPA. I was impressed with the drinkability as the amount of hops could potentially scare away people who don't like the style. That's simply not the case here as this has the complexity to satisfy veterans, but also the clean finish and flavor palette to entice those new to Double IPA's.