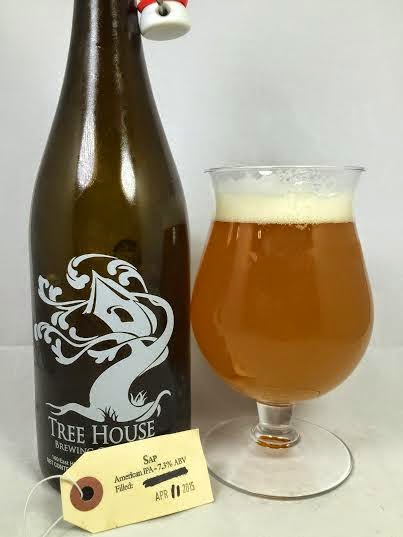 This is New England, and dammit we love pine in our IPA's. So, why beat around the bush? You might as well just go ahead and call your IPA "Sap"! Originally brewed as a Christmas beer, Sap was so popular it was worked into the regular Tree House rotation. It's described as a piny IPA as it is brewed almost exclusively with Chinook hops.

This beer is so unfiltered and dirty that I can't see a thing through it. It is golden orange and gave off a little more than a finger of off-white head.

The aroma is sticky, resiny pine with flowers and some biscuit/cracker.

That sticky pine, sap, and resinous hops are here on the taste in full force. At the front however is a touch of candied orange, melon, and grapefruit which helps neutralize a lot of the stickiness. Pine is the biggest component here, almost what I'd even call minty. Bitterness from the hops is huge throughout, but not so much that it makes you flinch. In addition to pine, there's a good spice component. Pretty unique.

With so much bitterness, it's not a shock that this is on the higher end of the dryness scale, but I'm not going to call it a desert in my mouth. It has a medium feel and good carbonation, but isn't too chewy for being so piny and bitter.

Sap delivers what its name promises and much, much more. Yes, you get the guaranteed pine tree and resinous sap, but that is just the beginning of a stellar IPA as it provides earthy dankness, some citrus, and delicious bitterness. Some drying in the finish my turn some off, but given the bitterness, pine, and biscuit malts, you should have planned accordingly. I can see why this was a Christmas beer, but it's nice that Tree House has made it Christmas throughout the year.