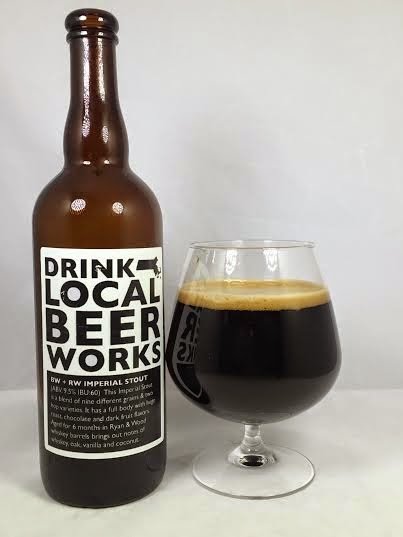 The Beer Works chain has multiple locations in Massachusetts ranging from the South Shore and far North. Boston Beer Works is the most well-known and they do produce an array of quality offerings, but not too many you'd call world class or mind-blowing. The entire lineup at all of their restaurants consists of all homemade brews, so that alone is respectable. However, the Beer Works chain has never gotten into barrel-aging or even making big abv beers. I recall a few month back trying a tequila-aged IPA with lime on cask. It wasn't my cup of tea, but I liked that Beer Works was trying something not only new, but giving barrel-aging a shot. So, when I paid a visit a few weeks back, I saw today's item on the menu. It's an Imperial Stout aged for six months in Ryan & Wood whiskey barrels. The bartender told me only about 400 bottles were produced, so I quickly snatched one up to take home.

Pours nearly jet black with dark brown on the edges. Got a finger of light brown head.

On the nose I am getting tons of whiskey, oak, and some plum.

Like the nose, whiskey is dominating like crazy, but luckily with no alcohol presence. Dark fruits are here too with almost a Quad-like taste. I pick up a lot of char from the barrel and another big flavor coming through is something similar to black licorice. As it warms up, some subtle milk chocolate and maybe, just maybe some shredded coconut. Overall, it's whiskey and black licorice that take control which can be a slightly odd combo, but the other flavors which are present are helping to even things out.

As I said before, no alcohol presence at all for a big barrel-aged stout and this is just as thick and viscous as any other on the market, but is a little too flat for my liking. Those overpowering (at times) licorice notes tend to overstay their welcome, but aside from that this is silky smooth and drinks too easily.

Beer Works taking this huge step towards a barrel-aging program is a great sign for the chain. This offering was full of complexity with its whiskey, dark fruits, and subtle chocolate. Had this same base beer been thrown into just straight bourbon barrels and not straight whiskey barrels, I think it could have competed with some of the elite offerings that are out there. Instead, while it was soaked in whiskey, that same spirit produced  some overbearing black licorice that tended to turn me off at times. Still though, this was a huge leap for Beer Works and they've shown they have the potential to produce some great things with their barrel-aging.