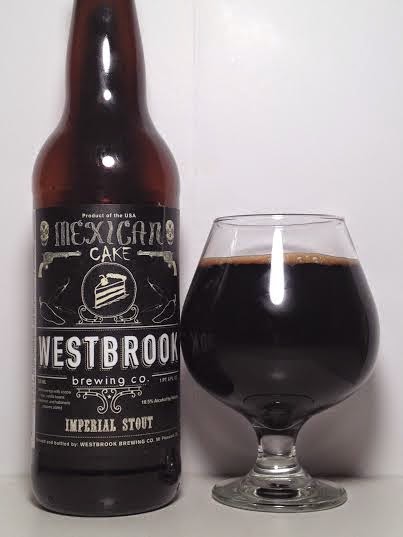 The so-called "Mexican Stout" or "Spiced Stout" trend has come on strong in recent years. People are used to big stouts brewed with vanilla and cocoa nibs, but when brewers start adding chipotle, habanero, or jalapeno peppers into the mix, people may become skeptical. However, as recent years have shown, this subgenre of stouts is a huge hit. Names that come to mind are Cigar City Hunahpu, Prairie Bomb!, and Perennial Abraxas. Another big one is Westbrook Mexican Cake. This was originally Westbrook's 1st Anniversary beer, but its popularity brought it back as a yearly release. As said before, this take on the "Mexican Stout" is brewed with cocoa nibs, vanilla beans, cinnamon, and habanero peppers.

Pours jet black, no light coming through this thing at all. Gave off less than a finger of a light brown/tan head.

Smells like sweet dark chocolate, almost like fudgy brownie batter. The next big aroma is the pepper skin. The cinnamon is subtle, but the vanilla starts to kick into high gear when the beer is given a chance to warm up.

This has a lot more flavor to it than other "Mexican Stouts" that I've had in the past, and it actually tastes good. The initial flavor I pick up is the spicy cinnamon. On the tip of my tongue is pepper skin, but thankfully it doesn't burn. The nose might have been fudge, but the taste is more along the lines of cocoa powder or a light milk chocolate. As for the habaneros, they are here in full force, but the only "burning" comes on the finish, but even then, it is a mild heat and thankfully not a 4-alram blaze in my mouth.

This is a big, bold, thick Imperial Stout that envelopes the entire mouth. There is no alcohol taste or feel and the only "burn" comes from the peppers. Considering the ingredients, this actually drinks easily and I've had no problem killing my entire bomber on my own.

I have to say that Mexican Cake is the first of it's style to actually be an enjoyable experience for me. It is thick and robust as a stout should be and the addition of the habanero peppers were in no way a deterrent. While the back end did tend to burn more than I wanted, the pepper flavor combined with the cocoa, vanilla, and cinnamon made for a melting pot of delicious flavors. If you are turned off by the "Mexican Stout", then I'd give this one a try as it is the best I've had in its class so far.