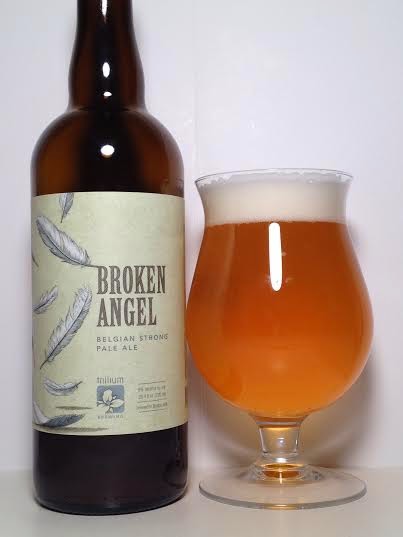 Not being content with sticking to the basics, Trillium has been able to branch out into different and unique styles. Recently they've been bottling some of their Belgian beers including their Belgian Strong Pale Ale. Clearly Trillium has been hitting home runs with their IPA's and American Pale Ale's, but how good of a job can they do with a Belgian recipe?

Pours a hazy, pale yellow with decent carbonation and a good finger and half of soapy, white head.

Classic Belgian yeast on the nose with banana, clove, and some hop bite.

The taste follows the nose rather well. It's kind of a bold, banana soda taste with a big helping of Belgian yeast and malt. In the middle of the mouth I am picking up a unique gumball/bubblegum flavor that was unexpected, but delicious. I also get some green apple skin and some saison-esque funk. Behind all of that is a miniscule tinge of hops that still let you know that this is an Americanized version of a Belgian recipe.

Mouthfeel is medium, but slightly thin. All of those sweet bubblegum and banana flavors linger nicely with no bad aftertaste. The 9.00% is hidden perfectly as it is completely undetectable. Some beers of the style tend to be quite dry, but this is clean and refreshing.

Broken Angel takes the standard Belgian Pale Ale recipe and leans a bit heavily on the sweeter flavors. Granted nothing is off-putting, but you would definitely describe this beer's dominant flavors as bubblegum and banana. It's good to see that an Americanized version didn't wimp out on the authentic Belgian yeast as this drinks like a genuine brew from overseas. Maybe a little thin in the mouth, but this is still leaps ahead of other American breweries' attempt at the style.