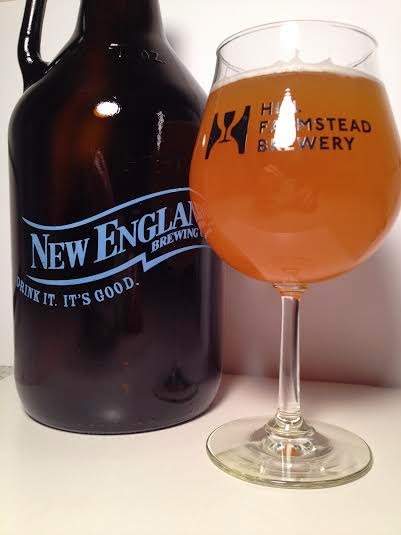 So, last week New England Brewing announced via Facebook that a new batch of Fuzzy Baby Ducks was available for growler fills. Two days later, it was all gone. FBD is a highly acclaimed IPA made exclusively with Citra hops. I never thought I'd get to try this, let alone have my own growler to myself., but I worked out a trade and have my own supply to enjoy.

Pours a hazy orange with a finger of white head. Good carbonation bubbles and head lacing.

For those who have tried Hill Farmstead Susan or Tree House Julius, this will immediately draw comparisons. Big orange, mango, and grapefruit combined with fresh hops and a big malt component. Just juicy hops, fresh malts, and big citrus.

The amount of hops and citrus are enough to make your head spin. It tastes like fresh-squeezed pineapple juice, but with a handful of wet hops. The other big ingredient, the malts, are here in full force as well, but everything is balanced out and you can truly taste every individual flavor as well as when their combined. It starts with the hops in front which is washed away by the citrus. Since each is so present, I'd swear they were using Galaxy instead of Citra, but that's just me. It has a fair share of malts too, but that is near the end, but that too is joined by hop bitterness. If anything is to nitpick, I'd say that the citrus is not the biggest flavor and it was more present on the nose, but at this point I am clearly just looking for a reason to say something negative.

This is full-bodied and tastes much bigger than a 6.20% IPA. It could pass for an Imperial IPA of you were blindfolded. At no point does this feel watered-down or lacking on the palate. The only things that linger are fresh citrus and hops and this frankly is one of the most refreshing IPA's I've had in a while.

What is left to say about Fuzzy Baby Ducks? I've seen pictures of the line at New England Brewing out the door on release day and I have to say that if the brewery was within a more reasonable driving distance, then I'd be in that line waiting too. Very rarely is an IPA more than a straightforward glass of hops, but FBD enjoys a level of complexity I have seldom seen in a single IPA. If it had just a tiny bit more citrus on the taste, then this would get a perfect score, but this is still without question worth your time and effort to seek out. Truly up there with the best of the best IPA's.