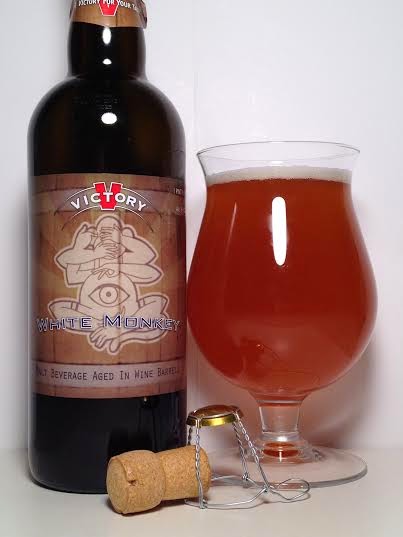 Victory Golden Monkey is one of my favorite Tripels. Granted it's an Americanized version, but that doesn't take away from the experience. Golden Monkey's bigger brother is White Monkey which is Golden Monkey aged for three months in white wine barrels.

Pours a hazy, golden yellow with some sediment at the bottom. Little carbonation and half a finger of pure white head. Absolutely no lacing at all.

Massive white wine and white grapes on the aroma. Some strong banana and spicy pepper with a little bit of funk. Maybe a small amount of lime, but no oak from the barrel.

The taste has some noticeable tartness from the white wine. There's definitely a big Belgian yeast component on the taste that was lacking on the aroma and it is glad to see it showed up. I do detect a slight white grape juice, but it's not as big as it was on the aroma. A pureed banana-like taste is here too with some cracker breadiness. It's interesting, sure, but while I won't ever say this tastes unpleasant in any way, I will admit that everything tastes somewhat disjointed.

Believe it or not, this is actually rather dry, but not desert-like. Maybe a tiny bit of carbonation, but otherwise kind of flat and thin. In terms of alcohol, at 9.50% it is non-existent. No flavors stick around which is a bummer, but at the same time nothing unpleasant liners on your tongue, so it's a trade-off.

While White Monkey is a slight improvement over Golden Monkey due to its barrel-aging, I wasn't completely blown away at what could have been an amazing experience. The addition of the white wine made for some delectable tartness, but the flavors didn't pop on the taste as they did on the aroma. A thin, but not watery mouthfeel was also a letdown, but I still enjoyed throwing this one back and would recommend the same to you if given the opportunity.