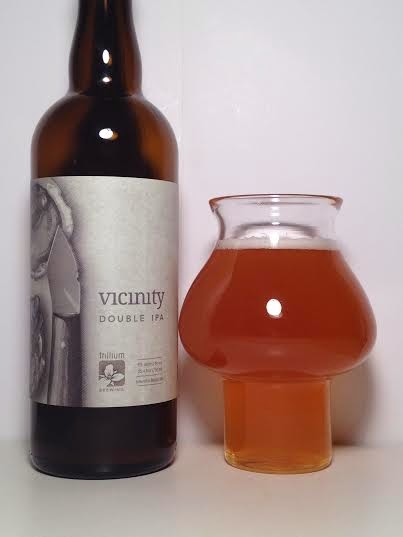 That beer glass is crooked. That's going to bother the hell out of me.

So, Vicinity is a Double IPA originally brewed for Trillium's next door neighbor, Row 34, and their one-year anniversary. I believe this is the 2nd batch and the first time it has been bottled.

Pours a beautiful, hazy, golden orange. I poured (what I thought was) aggressively and still only got less than a finger of white head. Little-to-no carbonation to speak of.

The aroma contains some blood orange with hints of an orange juice concentrate and acidicy. Some slight garlic/onion notes and a honey sweetness with pine and an unexpected sherbert/creme smell. For as unfiltered as it looks, it smells pretty clean.

The taste has a large grapefruit component which is interesting since I didn't pick up any of that on the aroma. That sherbert-esque aroma is back on the taste, but it is more like a fresh mango than anything else. The hops are quite bitter, but really fresh and they have that minty/green tea quality. Other than that, there's not as much citrus on the taste, but it makes up for it with it's hop bitterness. It's actually quite malty.

Again, the hops linger, but it's not a hop bomb and it doesn't leave your mouth dry. At 8.00% this just cross the finish line for Double IPA qualifications and I'd say that makes sense as it does come off as a little thinner than I'd like for the style. In regards to the alcohol, it is undetectable and this drinks easily.

Vicinity had a lot going on for it in the aroma, but it wasn't all there in the taste. The trade off was that you sacrificed citrus and juice for bitter hops and a strong malt presence. Considering the style, a more hoppy offering is expected, but considering the aroma had so much going on, I hoped that would translate to the taste. It's still a great Trillium Double IPA, but could have been so much better.