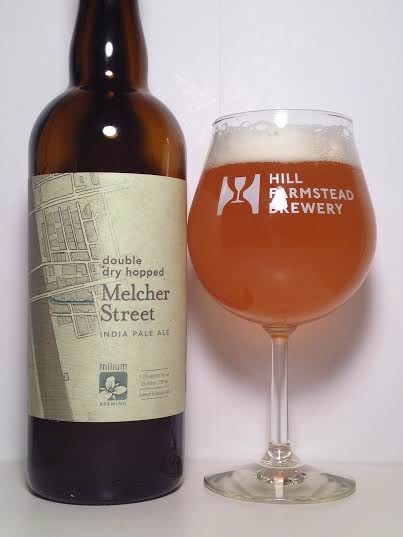 Today's topic is Trillium Double Dry Hopped Melcher Street. This is a variation of the original Melcher St which I had on draft many months ago and I absolutely fell in love with it's fresh-squeezed orange and hop juice combination. Let's see if the DDH version enhances my previous love affair.

Pours a hazy, golden yellow/light orange with a finger of white, foamy head.

I wasn't expecting THAT much of a hop aroma on the nose, but oh baby! It's hops, and massive citrus zest like a fresh-peeled orange or lemon. It's dank, but interestingly has a sherbert/creme smell to it.

This is pure hop juice. There aren't even hints of resin, it is as if you took a handful of hops and squeezed them as hard as you could into a glass. An abundance of orange and mango come after all of the hops with a good amount of pine. It's so hoppy that it could easily be an Imperial IPA.

With all of that hop flavor, it actually isn't that dry. Instead it is refreshing and those orange,mango, and pineapple flavors are on the finish. Maybe a little lingering bitterness, but it's not a deterrent. Considering all of the hops, this retains the drinkability of all other Trillium IPA's.

Double Dry Hopped Melcher St is something of an accomplishment in the world of American IPA's. I would go as far as to say it has the same hop intensity of Heavy Mettle, but with a lighter body. To pack so much hop juice and pine into the standard IPA and keep it refreshing and drinkable is an accomplishment worthy of the highest praise.