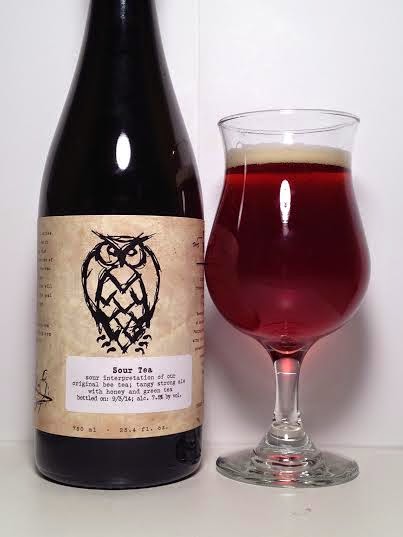 As the label says, Sour Tea is a variation on Night Shift's Bee Tea which is a Belgian Wheat Ale brewed with orange peel and honey and then aged on green tea leaves. I'm not sure what wild yeast it was introduced to in order to make the sour version, but hopefully it is tangy and strong.

Pours a transparent dark orange with a finger of off-white head.

The first aroma I pick up is the honey followed by green tea and somewhat of a sawdust smell with blood orange. Definitely some funk from the souring, but it is subdued.

Those green tea leaves hit me first on the taste. I know this isn't made with apples, but it has a cider-esque quality. Not just cider, but even an iced tea taste too. Almost as if you took an American Barleywine and eliminated all of the hop character. How is the souring? Well, unfortunately it isn't hitting me with satisfying tartness, but rather a bad sour candy taste. It does have somewhat of a sweet flavor thanks to the honey, but it's so faded that it does little to help balance out the wild bacteria.

The mouthfeel is rather thin and the unpleasant sour character combined with the aforementioned sawdust lingers after each sip. Carbonation, while not too noticeable, is producing bubbles on my tongue and some belching on my part.

I was hoping for a tart, green tea wild ale, but instead Sour Tea is sour for all the wrong reasons. Granted, there is some enjoyable green tea, honey, and zesty orange to be had, but they don't outweigh the negative souring process that has taken place. Not repulsive, but I wouldn't go for it again.