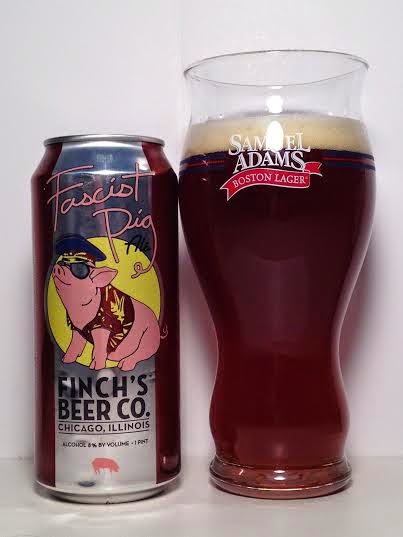 All Red Ales seem to be the same. Ideally you want big hops and caramel malts, but most of the time breweries settle for a by-the-book recipe which leaves the consumer with a bland, uneventful beer. I will be diving into my first Finch's beer with their own Red Ale and hopefully they can bring a change of pace to the style.

Pours a transparent dark orange/dark amber with a finger of yellowish head.

The aroma is dry, caramel malts with some hop juice, resin and hints of pine.

While I didn't pick up any fruity hops on the nose, the first sip in yields some fresh pineapple. After that the presence of sticky resin and bitter pine work your tastebuds over. The back end has a significant amount of rye and malts. Actually, the sheer amount of malt taste would lead you to believe this is a Black IPA.

The malts and rye really linger on the tongue after the finish. Speaking of the finish, this is noticeably dry, almost desert-like. I will say I was surprised to see that this was 8.00% as it drinks much smoother and lighter than its abv would suggest.

At the end of the day, Fascist Pig is your typical, everyday Red Ale. Admittedly this example of the style does let the caramel malts shine through better than most, and the addition of the pineapple on the taste was as welcome as it was unexpected. Hops are present, but I was hoping for a more hoppy offering instead of the abundance of malt and rye. Still, I'd have no reluctance in picking up a 4-pack to enjoy.