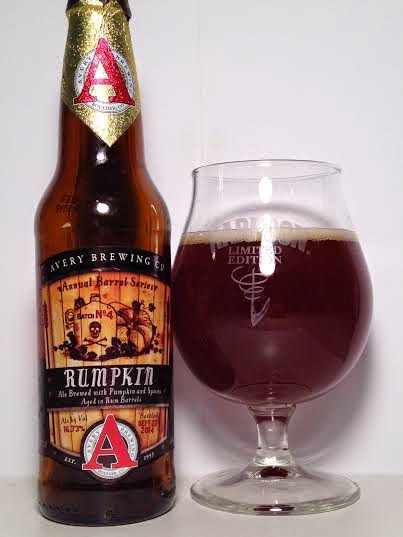 Tired of the same old pumpkin ales? Well, Avery has a barrel-aged monster for you. Brewed with locally grown roasted pumpkins and aged in rum barrels for six months, Rumpkin was not only one of the first barrel-aged pumpkin ales I ever saw, but also the biggest at 16.73%.

Pours a murky, dirty, dark amber. There's a significant amount of sediment in this one and it produced about a finger of a fizzy, off-white head that doesn't stay around long.

Whew! That first sniff will clear those sinuses for sure. A big blast of smooth rum up front. The most dominant spice is the cinnamon, but nutmeg is powerful as well. I pick up some wood from the barrel and some subtle ginger. A slight alcohol sting, but I expected that.

The first taste I am hit with is pureed pumpkin which is very sweet like pumpkin pie. The rum is also comes through loud and clear, but there isn't an alcohol taste to it, but instead smooth flavor. Speaking of the pumpkin pie, there's a graham cracker crust taste that is here which reminds you of Thanksgiving dessert. Just like the nose, cinnamon is more prominent than the nutmeg, but that's how I prefer my pumpkin ales. I pick up almost some raisin and dark fruits on the finish which can make this comes off as a doppelbock in some aspects.

I was surprised at how carbonated this was as the bubbles danced on my tongue. There are a lot of sweet flavors which at first seem like they disappear, but they do tend to stick to my tongue. I wouldn't call it excessively cloying, but they aren't exactly going away. Considering the abv, there isn't an alcohol presence as much as there is a noticeable warmth in my throat and chest on the finish.

My biggest concern coming into this beer was that it would be too hot and too sweet. I'm happy to say that this was not a hot beer out of the gate as the rum barrel-aging has added a complex level of sweetness to an already sweet pumpkin ale. While it isn't too hot, some of those sugary, pumpkin pie and rum flavors can overstay their welcome, but the high abv and carbonation helps move it along nicely.