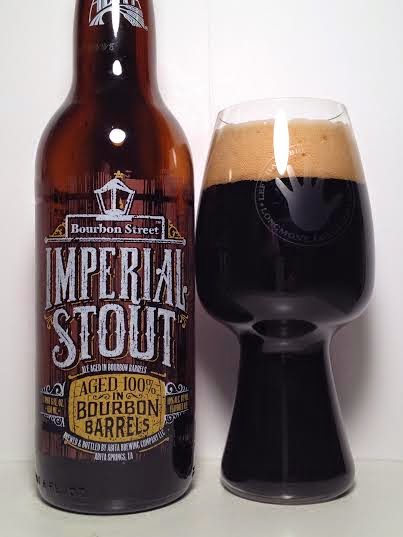 Abita isn't exactly a name that strikes a lot of fear in the craft beer world. Don't get me wrong, they produce a lot of solid offerings, but nothing that I would call mind-blowing or game-changing. So, when I saw a barrel-aged Imperial Stout from them at my local store, I figured maybe they can give me something worth talking about.

Pours pitch black with ruby red/brown on the edges. Produced a finger of a frothy, slightly off-white head.

The aroma is really nice. Lots of oak and bourbon up front. Roasted coffee, milk chocolate, vanilla, and even some cherry too.

The bourbon isn't as dominant on the taste, it is more subdued, but still present. A bitter, dark coffee taste hits you at the front followed by a somewhat watered down milk chocolate. I certainly get the wood from barrels and even a small dark fruit/raisin flavor. Cherries and memories of vanilla finish it all out. Basically, everything on the nose kind of limped over the finish line on the taste.

I wouldn't call the mouthfeel thin, but it certainly isn't as thick as I would like a big bourbon barrel-aged imperial stout to be. The good thing is that nothing is too cloying or too sweet and I'm happy to report that there is no alcohol presence on the aroma or taste for a big 10.00% stout.

While Bourbon Street had an inviting aroma and boasted itself as a 100% barrel-aged imperial stout, I will say that the flavors weren't super robust and came up a little watered-down. While all the flavors on the nose were there on the taste, it just felt like the ghosts of Christmas past showed up on the flavor. Still, there is enough complexity on the palate to give this one a try.