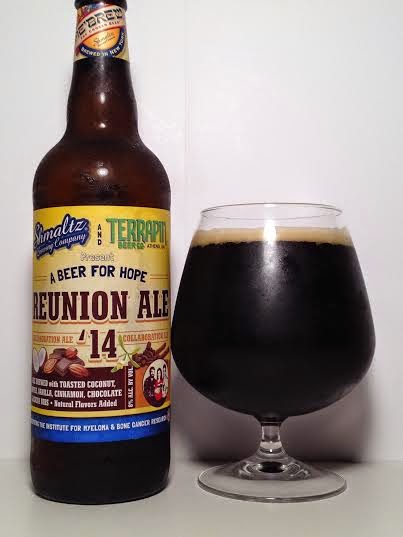 I must admit I knew nothing about this beer the day I walked into the store and saw it sitting on the shelf. I couldn't resist an ale brewed with toasted coconut, coffee, vanilla, cinnamon, chocolate, and cocoa nibs. I mean, come on! This sounds like an orgasm in a glass!

Pours nearly jet black, but holding it up to the lights shows a dark mahogany glow with some ruby red. Gave off a finger of off-white, khaki head.

It smells incredibly nutty with big vanilla notes. A lot of roasted coffee and just hints of cocoa.

The taste is almost identical to the smell. There is a huge, nutty flavor on the taste - almost like almonds. Coconut is in the background, but vanilla is almost as big as the toasted notes. There are small hints of roasted coffee and the chocolate is a little bitter like dark chocolate, but this is really just a nutty-flavored ale.

For such a sweet beer, the flavors aren't cloying and it actually finishes rather smooth. It's not too thick or thin and has a good balance of heavy flavor and easy drinkability.

Reunion Ale '14 is a sweet, flavorful, nutty brown ale with plenty of other flavors thrown in to keep you drinking. As a brown ale, it's one of the better ones I've had. It's right up there with Samuel Smith Nut Brown Ale with it's intense, nutty flavor, but it has extra kicks of vanilla and coffee. The 8.00% is hidden well and the smooth mouthfeel makes this an enjoyable treat.