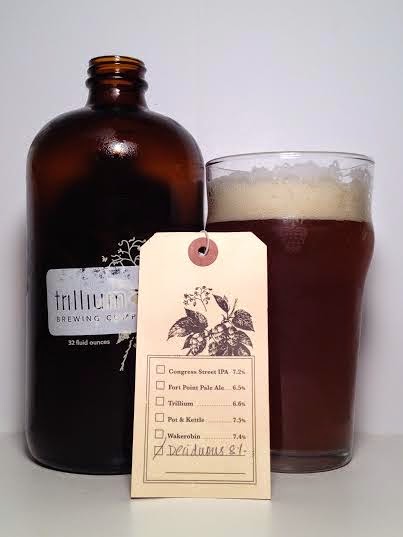 Described as a "Red IPA", Deciduous appears to be a combination of IPA and Red Ale. Usually trying to combine two styles into a new breed of IPA doesn't yield mind-blowing results, but if Trillium is doing it, then we have hope.

Pours a murky, red/brownish/burgundy with two fingers of white head.

A lot of malt on the nose. Very nice bitter hop presence with maybe a faint resin and a tiny bit of of a raisin or dark cherry.

The taste is pretty much small amounts of resin with some pine. Hops are hidden far in the distance. It has a touch of a honey sweetness, but not sugary or overpowering. The malts are more prominent than the hops, but that's not to say this a malt bomb. No one taste really stands out and it can be pretty bland.

While the flavors don't wow you on the taste, the beer itself isn't watered down. It has a medium feel with ok carbonation.

As I said before, these hybrid styles can be disappointing and Trillium Deciduous is no exception. It's not a bad beer or hard to drink by any means, but the flavors don't pop on the nose or palate. Given the two styles they were trying to incorporate, I wish there was more of a hop presence with some stronger pine and caramel.