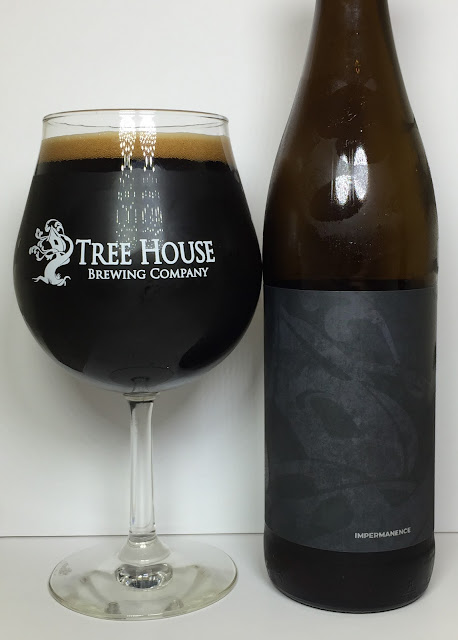 "Impermanence is an imperial milk stout brewed with coffee, chocolate, and maple syrup. Below these additions lies a complex base of chocolate, caramel, and dark crystal malts. A gentle pour yields dense mocha colored head that emanates succulent dark chocolate aromas and and a hint of maple sweetness that seems to stick around on the senses. The flavor is decadent, featuring a luxurious chocolate mocha character balanced by a delicate yet ever present maple finish that builds as the beer is allowed to warm in the glass. Impermanence is dense with flavor and rich on the palate yet maintains a certain fluffiness that makes drinking a big glass a true delight!"

Pours out pitch black and sits in the glass the same. I got almost a finger of dark brown head.

As anticipated, the aroma bursts out of the glass with maple syrup and iced coffee with cream and sugar. Dark chocolate and even some cherries show themselves with even a strawberry ice cream aroma...almost like Neapolitan ice cream. Comparisons to fudge and brownie batter also come to mind and even hot cocoa powder and chocolate ice cream. That's two ice cream moments for me, so this really is a dessert beer, but the maple makes it suitable for breakfast too. It's a very rich and decadent-smelling beer.

Maple and chocolate seem to be the power couple in this one. The maple is sugary, but not overdone, so this one treads Wilfred Brimley Stout territory, but does not cross the line. This lets me enjoy the flavors rather than making my body shake from too much sugar. I repeatedly mentioned ice cream on the nose and the same rings true on the taste. I assume it is from the combo of chocolate and lactose/coffee and lactose that is doing this to me, but hell, I am all for this being a new trend in the craft beer scene (if it isn't already one). The coffee still gives off an iced coffee impression and it isn't too dark and bitter. Maple starts and finishes each sip and it is what lingers the most in the aftertaste.

Mouthfeel is thick, but not a slow-moving Blob across my palate. This makes sense since it is a Milk Stout after all, so the job gets done accordingly. As previously mentioned, this isn't an overdose of sugar, so this one is easier to guzzle down as compared to other dessert stouts.

It took me a while to come up with a solid comparison for Impermanence, so bear with me. Years ago, Denny's had an ice cream sundae topped with maple syrup and bacon. This beer reminds me of that. The heavy amount of ice cream flavor and the maple syrup brought back memories of a greasy, dirty, late-night eatery where I indulged on what should have been the cause of cardiac arrest. Instead, I was whisked away to my own little paradise of ice cream and syrup and now Tree House has recreated that experience in Milk Stout form. God bless them for that.