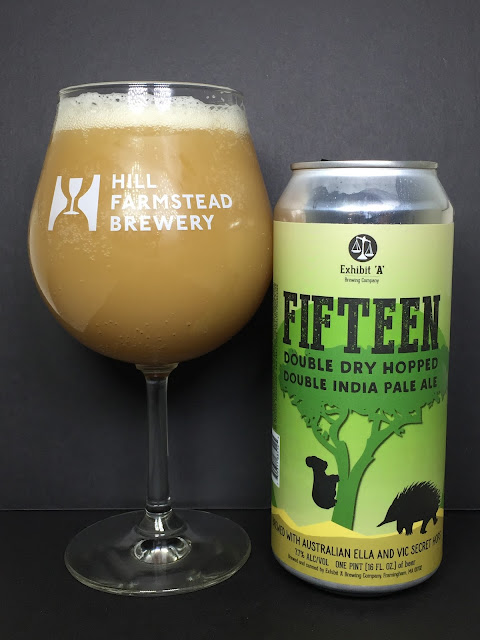 "Originally released as Demo Tape Fifteen, this beer has made it into our regular rotation. It features Australian Ella and Vic Secret hops"

Pours out brownish/orange in color (think apple cider, but more on the orange side) with a murkier than murky body and a finger of white head.

The aroma gives off dank hop notes and something reminiscent of rye as I get a distinct kick of spice. A big blast of spruce and even berries are also huge as is a sweet, caramel (malts?) flavor. One of the bigger aromas coming at me smells like a combination of orange sherbet, fusel alcohol, and Juicy Fruit gum.

The taste yields some big orange and pineapple notes, but everything from the aroma also makes a return.  Believe it or not, the spice and sweet malts seem to be the biggest contributors here. You'd think it would be an odd combo, but I am really into it. Not to be outdone, there's a thick, pine sap taste, but the hops also kick in some dank flavors and even some flowers. On the transition, it switches to some more of that orange sherbet with big grapefruit acidity, but the aforementioned Juicy Fruit gum taste comes in to close it out like Goose Gossage. The finish has a clean, bitter bite to go along with a malty sweetness.

Mouthfeel is full and creamy with no sign of the alcohol. The sweeter flavors tend to stick around long after each sip, but so does a delectable bitter flavor.

Fifteen was a unique IPA experience thanks to a wide array of flavors that may not look like a good match on paper, but it all worked out in the end. When an IPA is fun to drink, but also complex at the same time, then you have a winner on your hands.