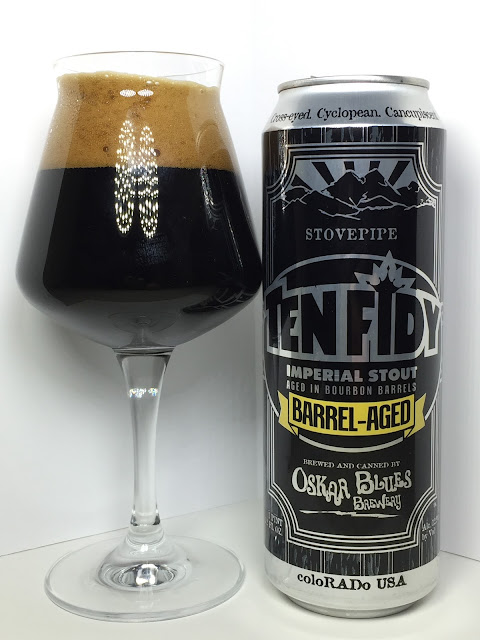 "Aged through four seasons and from a blend of the top Bourbons around, this Ten Fidy has morphed into a monster of cranked up flavor. Espresso, burnt sugar, rich chocolate, caramel notes are now driving alongside the vanilla, oak, bourbon from the barrel and been smoothed out during maturation. Even at 12.9% (75 IBUs) it is cool and drinkable, letting each sip add more and more complexity."

Pours out pitch black in color with not even brown on the edges; it is a true abyss of darkness. The pour produced a finger of mocha-colored head.

I don't know why I was concerned about the bourbon being too subtle, but hot damn it is MASSIVE on the aroma. When you whip your head back and out loud say "Woah!", then you know you have something special. Bourbon, chocolate, and tobacco are screaming out in droves and the barrel is imparting so much oak and char it is ridiculous. A lot of cherries also smack me in the face as do raisins, and figs. Bitter dark chocolate with some smoke and a touch of booze finish things off.

One sip in, and this is unquestionably a superb Bourbon Barrel Aged Stout. If you spike a glass of chocolate milk with top shelf bourbon, then you get Oskar Blues BA Ten Fidy.

Smooth, fluffy milk chocolate is up front, but it shares the stage with sweet, sticky bourbon. Like I said on the aroma, the bourbon is not being shy at all, and I love every second of it. The barrel character soon takes over as the char and tobacco really storm the palate in full force and really just leave destruction in its wake. There's plenty of oak and wood to be had with some hints of smoke from a BBQ pit. A lot of cherries and a cherry cordial taste come in after the barrel character has run its course and more dark fruit influence in the form of figs and dates push their way to the front of the line. There's a touch of booze on each sip, but the alcohol taste is welcome in this case as it helps break up some of the flavors and actually moves this big bastard of a beer along the palate.

Mouthfeel is thick, luscious, and smooth on my tongue. It feels like a 12% BA stout, but never at any point is it too intimidating to drink. This one you could sip on for an hour or two, or due to its vast array of flavors, you could plow through your stovepipe can quickly and then pay for it later. In any case, it's a calm feel with silky body and robust flavor profile.

Barrel Aged Ten Fidy did not simply add bourbon to an already superb base beer. No, no, no. The barrel aging not only enhanced the original blueprint, but added in too many flavors to count. What exactly did this do to distance itself from so many other bourbon barrel aged stouts? That's a good question, but in reality, when you drink one, there is just that "X-Factor" that hits you and you know the answer. In this case of BA Ten Fidy, you know it when you drink it, and what I do know is that this is superb in all aspects. Personally, I have seen this at all of my local stores and in decent amounts. Why people aren't snatching this up like Beanie Babies (terrible, out-of-date reference...might have been good in 1998) is a mystery to me. If this is still available next time I go to my store(s), then I am grabbing every can available.