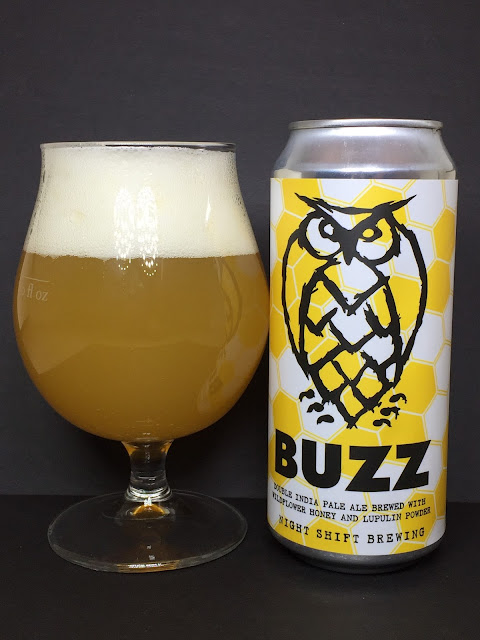 Pours out golden yellow in color with a hazy body and two fingers of white head.

Lots of lemon and lemon peel dominate the aroma and add some tart acidity. The other star is beeswax with honey sweetness.

The main theme of the taste is sweetness. The wildflower honey is not shy at all about making its presence known as it adds in a sugary component to produce a sweet-tasting IPA. I mentioned beeswax on the aroma and it is just as prevalent here which mixes with the honey itself for a natural honeycomb flavor. In addition to the lemon, a significant amount of orange is also here, but combined with the sweet honey, it makes for a dessert-like orange sorbet. Overall bitterness is dialed down, but that's likely due to the use of the lupulin powder. I think that was a good call as bitter hop juice wouldn't mesh as well with the overwhelming honey flavor. The only indication of bitterness is at the very end on the back end of each sip which has a lingering bitter character, which is a nice final touch.

Mouthfeel is full with a creamy texture and is quite fluffy on the tongue. It doesn't feel like an Imperial IPA and drinks much lighter than 8.5%. Some might not dig on the abundance of honey sweetness, but I personally like it.

Buzz certainly made use of the honey in this IPA and it was a good match for lupulin powder. The fans of the sweeter IPA's will gravitate towards this Night Shift offering. It might be an acquired taste, but I still think everyone can find something to like about this beer.