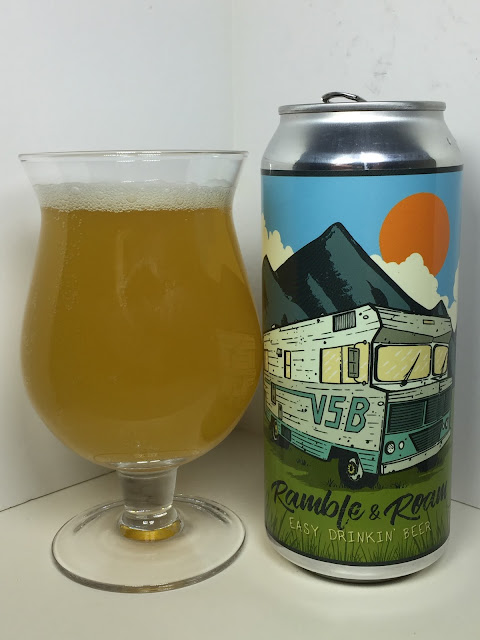 Once again I am humbled and thankful. The good folks at Vitamin Sea Brewing have once again graciously supplied me with some beers to try and I am very much appreciative. If you tuned in to my previous Vitamin Sea reviews (and I know you have), then you should know that this small operation based in Hull, MA is producing excellent beers and is quickly gaining some serious word-of-mouth hype.

A few weeks ago, I was conversing with them over Instagram (go follow!) and I was invited over to pick up some beer. There, I met most of the crew and their families, who were warming, welcoming, accommodating, and just the nicest group of people you'll ever meet.

So, in the dead of winter (and a pending bombogenesis...whatever the hell that is), I think we should bust out a Blonde Ale with Citra!

As always, to the crew at Vitamin Sea, thank you oh so very much!

Pours hazy and straw yellow in appearance with a finger of pure white head.

Lots of doughy and bready malts on the nose. Very refreshing tropical notes of lemon, orange, and even hints of lime to go with an overall bubblegum note.

The taste follows suit in terms of those zesty, refreshing notes of lemon peel and orange rind. Absent from the aroma, but here on the taste, is a lot of grass and earthy flavors, but not surprisingly, the malts are reigning supreme. At time it tastes like a mouthful of fresh dough with a distinct saltine cracker flavor. A semi-sweet flavor of that bubblegum or Juicy Fruit is back from the aroma, and much like the nose, it has an overall aura over the entire experience. The finish is relatively clean with lingering malts.

Mouthfeel is light and refreshing with (obviously) no alcohol. It manages to douse the palate in flavor for such a small beer.

Ramble and Roam with Citra was a top example of a Blonde Ale. Combining a base doughy quality with zesty and tropical citrus flavors makes for sky-high drinkability that will be ideal for summers by Natasket Beach. This will be a beer that pulls them in off the strip down in Hull come (hopefully) later this year.