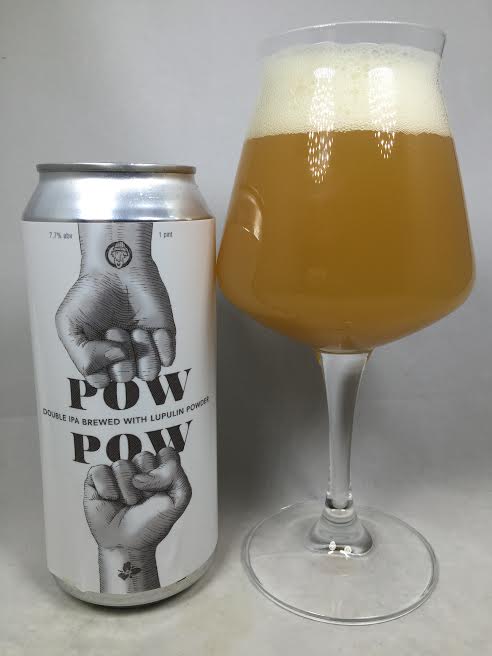 "The idea for Pow Pow was born when 2 very passionate individuals joined forces during the epic 2016 beer festival Beer Camp Across America. Devil’s Backbone, Dogfish Head, Sierra Nevada, Stoudt’s, Lawson’s Finest Liquids, and Trillium collaborated to create one of the festival’s signature beer Pat-Rye-Ot, a pale ale that pays tribute to America’s original homebrewers. During the process two brewers in particular were fascinated by a new hop product that was used in Pat-Rye-Ot. The product: lupulin powder. The fascinated brewers: Sean Lawson and JC Tetreault.

Lupulin powder is essentially a super concentrated hop product made by flash freezing and then shattering intact hop flowers. In early November, the team experimented with different ways of utilizing the lupulin powder in both the whirlpool and during the dry hop, taking into account beer and wort temperatures, contact time, lupulin powder temperatures, and consistency of the powder"

It pours out a hazy, sunset orange color with two fingers of bright, white head.

The aroma is a bouquet of fruit juices with orange, mango, and melon leading the charge. It's tough to detect some hop bitterness as the fruit juices overload the senses.

I think the overall flavor I get on the taste is acidic mango fruit juice. It's not bitter with hops, but rather bitter like pulpy citrus. It's also noticeably sweet enough to make you think this was aged on fruit, but it was not. The Lupulin powder has cut down the bitterness and left the juicy hop flavors to do their work. As it warms, the trademark Trillium orange sherbet comes through nicely. While hop bitterness is put on the back burner, the finish and lingering flavors do contain a good amount of it to help balance out the beer.

Mouthfeel is full and soft. At 7.7%, a lot of people wouldn't classify this as a Double IPA, but as a DIPA, it is easy to drink and (obviously) feels more like a single IPA.

I had a hard time coming up with a more descriptive review for this one, but honestly, is is another great IPA from Trillium (and Lawson's) and that's really what you've come to expect. I personally wouldn't put up there with the best of the best Trillium IPA's, but if it was a regular offering, yeah, I would grab a 4-pack when it was available.