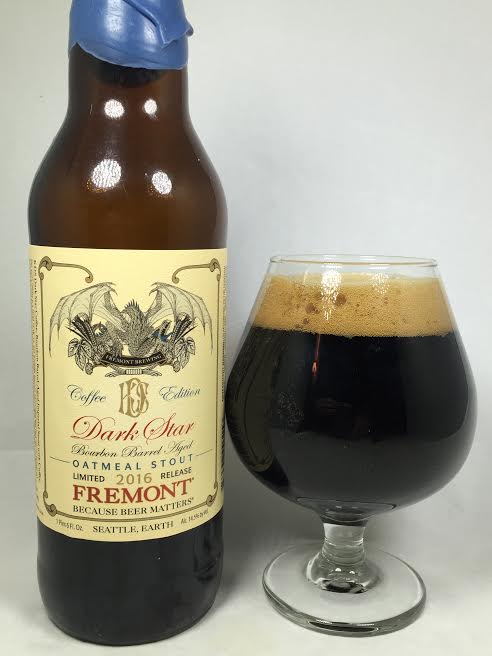 It's time for a variation on the previously reviewed Fremont Bourbon Barrel Aged Dark Star with the coffee edition. These Dark Star stouts have garnered acclaim in recent years with their Fall releases lighting up message boards across the galaxy. As you may have read, I loved, LOVED BA Dark Star, and who doesn't love a good coffee stout? So, needless to say, I have some high hopes for this one.

Bourbon is most noticeable on the aroma. As opposed to the standard BA Dark Star, the notes of chocolate, char, tobacco, and wood are a bit more subtle. As the for the coffee addition, the only coffee I get is from the natural coffee aroma you get with any big stout.

Like the nose, the bourbon is the first in line on the taste. It has a sugary, sticky sweetness to it with no alcohol flavor. Some sticky molasses and dark fruits are a welcome addition as plums, raisins, and figs come to the party. An overall oak and sawdust taste encompasses everything and gives this more of an Old Ale experience than anything else. A decent amount of char and a lot of roast bring you back to the Imperial Stout territory. Again, it must be said, but the coffee is seriously lacking for me. As previously mentioned, this does have the familiar roasted qualities associated with the style, but I was expecting a big, back-handed pimp slap of coffee. Instead, I think my daddy is going to make me shake down and hustle some more johns in the hopes of getting some freeze-dried Taster's Choice because I am not getting the serious gourmet shit in this bottle.

Mouthfeel on the other hand is perfect. It is soft, full, and coats everything in sight. It's a big boy beer at 14.5%, but it is easy to sit back and sip on this one for hours.

Like it's brother, Coffee Dark Star has all the ingredients to make a superb BA Imperial Stout. It kinda sucks that I have to deduct points due to the lack of the promised showcased ingredient, but so is life. If you're expecting, say, a Bourbon County Coffee, then  I say you should pump the brakes on those expectations. The coffee was almost so subtle that it was practically non-existent, but this is still  a top-notch BA stout regardless of the lack of coffee.