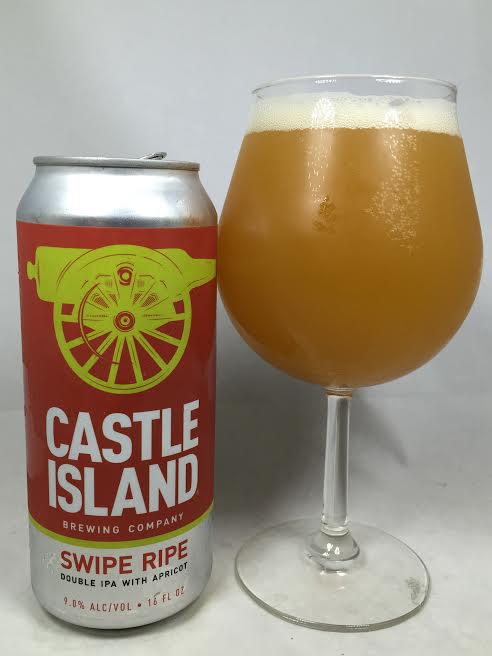 "Amarillo, Citra, Mosaic, and apricot puree: It's a match! This massive Double IPA blends all four for a gigantic burst of juicy flavors with the soft texture of ripe fruit. You don't have to share, but it's bound to be a whole lot more fun if you do. Like what you see? Swipe Ripe."

Pours a completely hazy, sunset orange. You can't see a thing through this beer. The pour produced over a finger of white head.

Somebody call Harry S. Truman because I think Castle Island just dropped a Juice Nuke on me. To quote Inspector Gadget: Wowsers! The sheer amount of apricot influence in this is borderline insane and reminds me of Trillium's Hundred Thousand Trillion. The great part though is that while the apricot puree casts a shadow over the entire beer, the sheer amount of hops contribute just as much to make a nearly perfect tasting experience.

Obviously the first thing you'll notice is apricot juice up front, but if you hold it, then a dank hop character shares the stage. The hop lineup has you anticipating juice bomb before you take a sip, and boy does it deliver what it advertised. Massive orange juice and pineapple provide a break from the apricots, but Mosaic comes in and blindsides you with some cedar, wood, and a touch of spicy black pepper. An overall dessert-like sherbet flavor is here throughout. The transition is borderline orgasmic as apricots part like the red sea to reveal a delicious, dank, weed-like taste which lets the hop bitterness shine. On the finish we go back to more of a glass of fresh-squeezed juice with some grapefruit acidity and more apricots and orange. This is just awesome.

Mouthfeel is full and soft. The 9% abv listed on the can must be a mistake because this drinks far easier than a DIPA bordering on a Triple IPA. At no point is this too thick or syrupy and it feels more like a standard, single IPA rather than an Imperial. Without knowing it, you could gulp this down no problem. Drinkability is higher than high, but the 9% will make you slow down even though it is so hard to do so.

Swipe Ripe is not only Castle Island's best beer by far, but in a state with so many breweries topping the "Best of" lists with their IPA's, Swipe Ripe deserves to not only be in that same company, but it surpasses many of them. The big guns around the state are usually Tree House and Trillium, but this offering from Castle Island is right up there and beyond a lot of what they have to offer. It's a nearly flawless combination of juicy and dank IPA's and has insane drinkability. I really, REALLY hope they bring this brewery exclusive back again because (and I don't ever say this lightly) this is one of the best IPA's I have ever had.