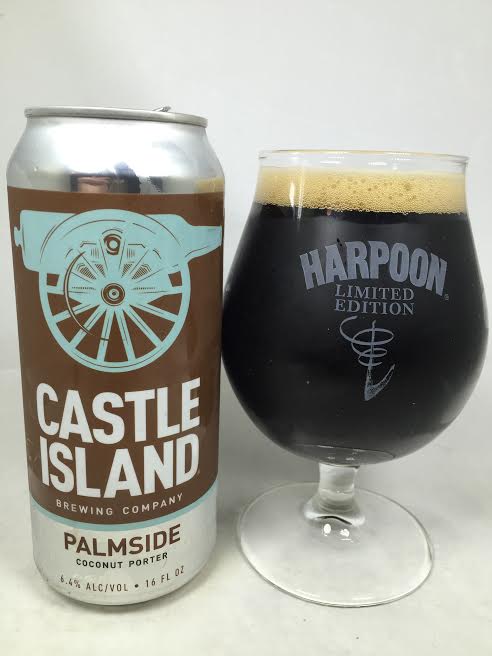 "Smooth and silky with an uplifting coconut blast, Palmside is a tropical riff on our favorite porter recipe. We blend seven specialty malts for a rich, roasty backbone, then layer in loads of toasted coconut for a fragrant sweetness to keep it balanced. So find yourself some shade, kick those feet up, and go nuts."

The pour is pitch black for the most part except for hints of glowing, ruby red on the sides. There was a little less than a finger of khaki/almond-colored head.

The coconut is bold, but not overpowering. Then there are notes of rich chocolate, vanilla, and iced coffee.

Toasted coconut up front. Like the aroma, it is flavorful, but not overdone. Surprisingly, the black coffee flavor shares just as much time (probably more) with the coconut, almost as if the base porter still holds center stage despite the abundance of coconut in this beer. The good news is that the base porter is also excellent, so this isn't a big issue with me. The second half is actually all dark roast coffee/burnt coffee grounds, which again points to the base porter recipe being what you taste first and foremost. It isn't too bitter and it drinks more like cold-brewed iced coffee. I wish there was a bigger coconut component to this, but seems to go away after the initial burst at the start.

Mouthfeel seems relatively standard for a 6.4% porter. It's calm, but doesn't leave a lasting, coating feeling. That burnt coffee leaves an aftertaste, but nothing too extreme.

In the world of coconut porters & stouts, Palmside is a solid entry. If this was featured in my Coconut Porter Versus, then I would have ranked it between the Maui Coconut Porter and the Baxter Window Seat. As I said before, I wish coconut was more present throughout in order to create a great dessert beer, but the coconut was more for accenting the base recipe instead of being the star. A solid porter that needed a larger emphasis on the showcased ingredient.