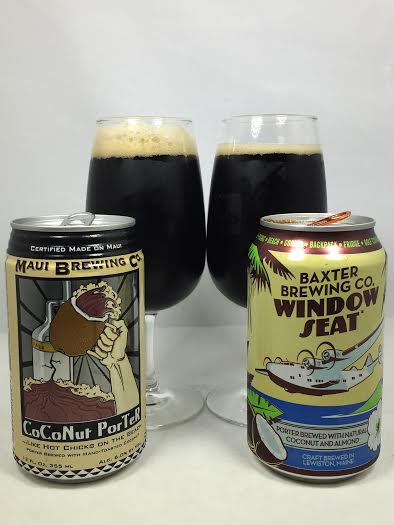 I really enjoy doing these "Versus" reviews. This is my second time doing one of these comparisons and this will be an ongoing feature on the blog. It's fun to put two beers of the same (or similar) style next to each other and see how one brewery approaches the recipe when compared to another. Last time I did this, I compared two beers of the same style, but were from the same brewery. This time, the breweries are different and the example is a coconut-flavored porter. I had a sweet tooth today and my dessert requirement is going to be filled (and then some).

Maui Coconut Porter
Sits seemingly pitch black in the glass, but shows shades of ruby red when held up to the light. The almond-colored head stuck around forever.

Baxter Window Seat
Almost identical to the Maui porter with the black body and dark red highlights. The head was also the same color, but with Baxter, the head disappeared quickly and wasn't as frothy.

Maui Coconut Porter
Dark roast coffee is the most prominent. There's a small touch of toasted coconut, but it's not all that big. Some nice sweet chocolate syrup on the back end makes this smell like dessert and not the coconut.

Baxter Window Seat
A-ha, the coconut came to play on this one. Shredded coconut and nuttiness remind me of an Almond Joy. Then there's overly bitter coffee grounds hidden behind everything.

Maui Coconut Porter
Thankfully the coconut showed up on the taste, and it's delicious. Don't think shredded coconut, but more toasted, which isn't as sugary or artificial-tasting. Middle of the mouth has flavors of iced coffee and mocha with a bitter dark chocolate finish with a minor bite of dark roast coffee on the very end.

Baxter Window Seat
I compared the aroma to an Almond Joy and I can safely say the same thing for the taste. All of the flavors are here just like the Maui porter, but they are more vibrant and dessert-like. A pleasant likeness to a fresh cup of coffee with cream is here too. That coffee bitterness is here throughout, but it's not like burnt coffee grounds, so it is actually welcome in this case.

Maui Coconut Porter
The feel is relatively calm, but that dark coffee bitterness sticks to every bit of my tongue and takes a few moments to go away. While you can't expect a luscious mouth-coating for 6%, the body does come up a tad thin, but not watery.

I give the victory to Baxter Window Seat on this one. With the Maui Coconut Porter, the coconut was a background player while the coconut on the Window Seat was the lead actor. The Window Seat is a better dessert beer with the flavors popping off more on the taste and aroma when compared to Maui.