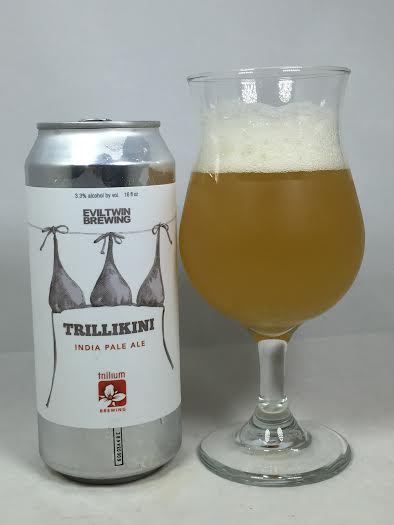 "We teamed up with our friends at Evil Twin to brew Trillikini; our first beer available in cans and the ultimate summer crusher perfect for those endless days at the beach or timeless backyard BBQ's. Don't let the low ABV fool you, this hazy blonde IPA is loaded with hop-driven flavors of candied peach, grapefruit and lemon zest complimented by fluffy oats and a rustic graininess. Clean and crisp with firm, thirst-quenching bitterness, Trillikini is destined for your icy cooler."

Last week was quite a week for Trillium Brewing as they released three new collaboration beers. Two of these were with Evil Twin Brewing which included the first canned beer to be released by Trillium. I was at the Canton brewery multiple times last week for each release and my wallet is hurting quite a bit, but whatever. Going into this sessionable offering, I am a little skeptical. I mean, Trillium's IPA's speak for themselves in terms of their quality, but even being able to work their magic on a 3.3% IPA is going to be a daunting task.

Pours with the same typical, hazy body that is standard for the New England IPA, but the color is a paler yellow. The pour produced two fingers of white head.

I must say the aroma has an unexpected (but not hated) helping of oats, wheat, and multi-grain bread. After that are some lemons and a tiny bit of orange.

The taste brings a stronger lemon/lemon zest quality which was just an afterthought on the aroma. This is great news because the immediate splash of the lemon creates a refreshing quality. That being said, the crisp and cool qualities subside immediately and are replaced by the grains and wheat from the aroma. It's almost rustic in a way with such a big flaked oak presence, but it has just enough of the tropical influence to strike a good balance.

Mouthfeel is incredibly light. Those familiar with Trillium's IPAs will notice a thinner body, but that's expected with a 3.3% session ale. While those bready qualities made up the majority of the flavor profile, the tropical hops helped make this an easy-drinking experience. You will easily annihilate those 16oz cans left and right on these hot Summer days.

Session IPAs typically don't set the world on fire. While the same can also be said for Trillikini, this is still packed with a lot of the typical Trillium flavors while being sky-high on the drinkability scale. It's better than a lot of the Session IPA's out in the market, but much harder to come by thanks to its brewery-only availability. If you're someone who trades just to have the next big thing, then live your life the way you want to, but if you're trading in hopes of expecting a game-changing SIPA, then temper the expectations and just grab something at your local store.